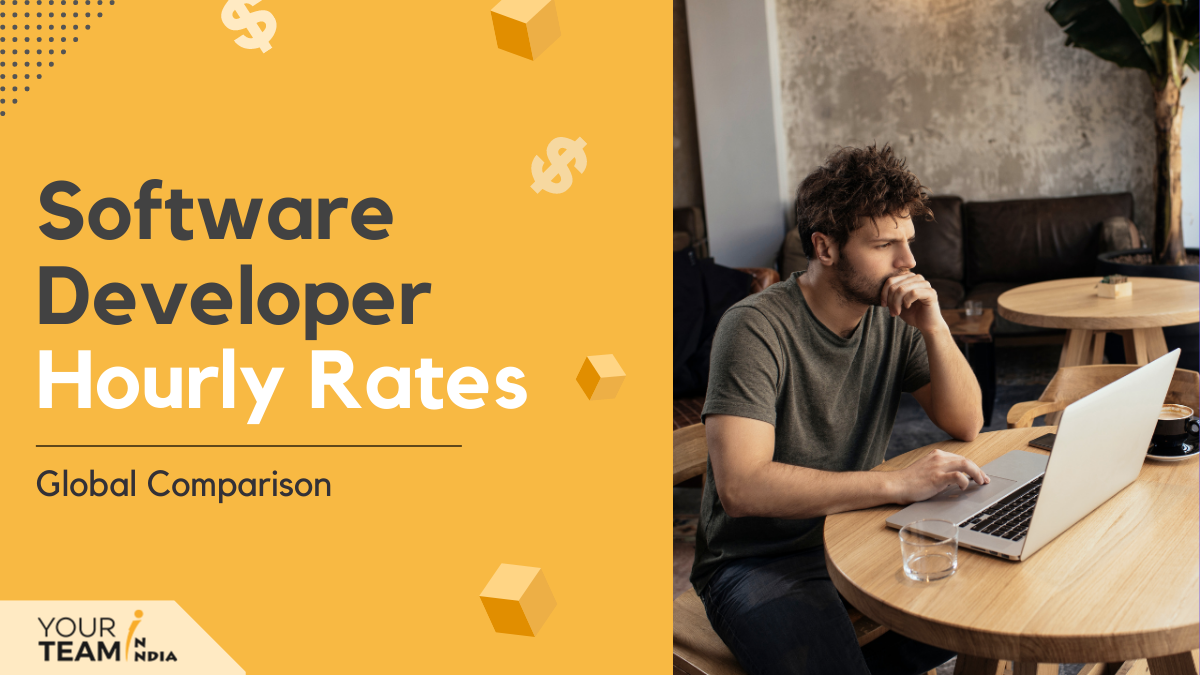 Offshore software development has gained an exponential boom over a couple of years. This proven business strategy has made it possible to work with top-notch professionals residing overseas.

While small businesses use this approach to bring down development costs, large enterprises use it to extend their existing team and increase their global outreach.

If you are looking to hire dedicated offshore developers and want to learn about the software developer hourly rates, we have curated this guide for you!

Since its inception in the early 2000s, the outsourcing industry has revolutionized different sectors.

As outsourcing continues to grow, a few trends would help you understand the current state of global outsourcing software development:

As we know, outsourcing has been a growing trend since the early 1980s. However, today’s offshore development scenario differs significantly from the earlier models.

Change In Software Development Rates Over The Previous Years

Since the last time we published this blog; the market trends have changed drastically, and so have the software development rates over the earlier years.

Surprisingly, the compensation for app developers for their services will increase by up to 4 percent and will continue to rise for all the technologies.

Also Read: A Complete Guide on How to Hire Developers For Startups

We have done the detailed market research to find out the software developer hourly rate across the globe.

What is the Software Development Hourly Rate In The United States?

Software developer hourly rates are the highest in the United States, ranging from $38-63 per hour. The total salary, including taxes and benefits, ranges from $137k to $173k.

Although hiring in the United States is a bit expensive, there are numerous benefits, such as lesser language barriers and reduced miscommunications.

The following table depicts the average hourly rate of software developers in various cities in the United States:

What Is The Software Developer Hourly Rate in Asian Countries?

India, the Philippines, and China are the three major countries offering custom software engineering services. Let’s drill down the software development services across the top three Asian countries to make things easy for you:

The entrepreneurs who wish to execute their ideas by building top-notch solutions at affordable rates consider hiring Indian developers. India is one of the best countries to outsource software requirements.

Hiring an offshore developer from Asian countries is the most budget-friendly option. Explicitly speaking about India, the range to hire developers starts from $18 for a junior developer and goes up to $40/hr.

Here are why the country is one of the most preferred outsourcing choices:

Philippines is another country with the fastest-growing IT industry. With more than 200 offshore software companies and 95000 technical positions, it is considered the second-best country to build software teams overseas.

Among other Asian countries, China has considered s the third-best for hiring mobile app developers or web developers. Chinese developers are the first among all HackerRank challenges. Today, there are more than 50 science and technology industrial parks.

In China, the overall revenue in the software development industry is expected to increase by 6.9 percent in the upcoming five years, reaching $1.2 trillion.

What is the Software Developer Hourly Rate in Europe?

Some of the Best European Countries to Hire Software Developers:

Europe is a good place that allows you to hire dedicated offshore developers at cost-effective rates. The region is famous for its qualified IT professionals. And the rapid growth of the industry resulted in 1 million software developers on the continent.

Here we have jotted down all the information regarding software developers’ hourly rates in different countries of Europe:

Western Europe is one of the most expensive & best offshore development countries globally. Due to the high costs of living, taxation systems, and expert developers, the average hourly rate of software developers is also high.

The hourly rates in Western Europe range from $20-$45 per hour, with annual salaries of about $60k.

Eastern Europe is known as the hub of start-up culture. The developers are well-versed in software technologies and programming languages such as C/C++, Java, JavaScript, .NET, and Python.

The hourly rate for software engineering services in Eastern Europe ranges from $11-$25. The average salaries of software developers range between $40k-$70k, while Poland is the most expensive country.

What is The Software Developer Hourly Rate in Latin America?

According to Accelerance, most of the businesses being invested in are small and medium enterprises. But the critical fact to consider here is that about 90% of these tech firms are located in Colombia and Mexico.

European trends have a strong influence on Argentina’s IT market. Not only economically, but Argentina has also been culturally connected to Europe. Well, it has the most expensive IT development teams in the region. Meanwhile, this is because the developers have rich experience in working with western countries.

The country gives rise to 13,000 software developers every year, most of which go to offshore companies. Nevertheless, companies are CMMI certified, benefitting from American influence.

Brazil is one of the leading software development destinations for outsourcing. Furthermore, Rio de Janeiro is a global IT center, and the city has 8/10 top technology universities producing 14 thousand alumni each year. For this fact, many US companies prefer recruiting Brazilian talents.

What is the Software Development Hourly Rate in Africa?

Africa’s IT industry is still in its emerging phase but has started to depict rapid growth. Moreover, the country has now begun to attract clients from across the globe.

Outsourcing is not an easy decision to make. For most companies, the cost of hiring developers is the top priority.

Indeed, the hourly rate of software developers does matter, but the most important thing is finding an overall package. Our take is that you must go for the country that can provide top-notch developers with proven experience at affordable rates.

With a large team of dedicated developers, we can help you develop digital solutions while maintaining the utmost quality. Connect with our team now and get a free consultation.

1. What do software developers charge per hour?

2. What is the top offshore destination for outsourcing?

The top destinations for outsourcing are as follows:

3. What is the hourly rate of a Software Developer in India?

In India, the range to hire developers starts from $18 for a junior developer and goes up to $40/hr.

4. Which Country is the Best to Hire Software Developers?

The 5 Best countries to hire software developers are:

Hi, I am Saryu Pathania. Communication has always been one of my key strengths, whether vocal or written. I started my career as a marketing professional, and in my journey as a marketer, I realized that Copywriting is my true passion. Over the years, I have honed my skills as a creative writer by working on various content formats for B2C and B2B clients.