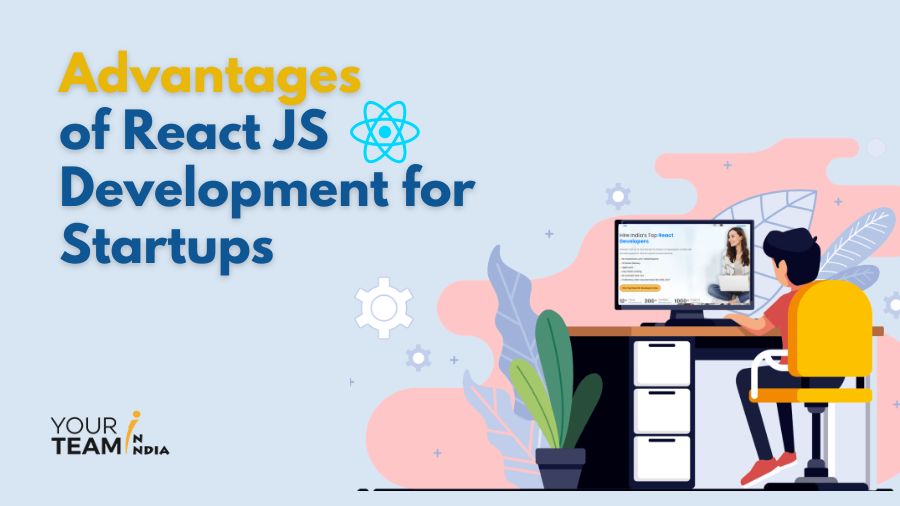 In recent years, businesses have witnessed a significant digital shift globally. Today and the coming years are about immense web and mobile app development growth. Customers need an interactive and intuitive interface, and it is critical for businesses to deliver an optimal user experience. Thus, startups aim to offer digital solutions that emphasize well with their target audiences.

For a startup, it is a critical business decision to choose the right framework from the available frameworks in the market. This can be possible only if they can find and hire react js developers.

Today, React JS is one of the preferred front-end frameworks. Thanks to its capability to build rich and engaging web apps. One of the biggest reasons React JS is favored over other frameworks is its ability to deliver better and faster performance. Therefore, React js development is the first choice of businesses aiming to have intuitive and seamless mobile apps.

React JS is an open-source platform created and maintained by Facebook. Overall, it is an efficient, scalable, and flexible open-source JavaScript library used for developing simple, fast, and scalable front-ends for web and mobile applications.

According to the survey by Stack Overflow findings, React was ranked 1st as the ‘most loved web framework,’ while Angular stood ninth on the same list.

Today, over 220,000 live websites are using React. Not only that, but industry giants like Instagram, Google, Netflix, Paypal, and many others have also used React JS in their software productions.

With so many leading brands using React JS, including some of the top giants worldwide, React must provide extraordinary benefits, right?

Let’s look at some statistics.

For Business Owners: 12 Advantages Why React Js Can Be the Best Choice for Your Project

Let’s have a quick overview of the critical benefits of React JS to understand why it stands out in the market of front-end development frameworks and why hiring react js developers have become a priority for companies.

React essentially allows developers to employ individual parts of their application on both the server-side and client-side, which eventually elevates the speed of the development process.

Simply put, With React js, you can ensure a fast user interface for your application and optimize the performance precisely without hassle. All changes made won’t cause the application’s logic.

React code is flexible in nature and easy to maintain due to its modular structure compared to other front-end frameworks. As a result, this flexibility saves businesses time and cost.

For any business with a digital presence, search engine optimization is the critical ingredient that leads them to success.

According to Moz, the less time page takes to load and the faster the delivery speed, the higher an application will rank on Google. This is when React JS developers come into play.

But, if an application has high-quality UI, then it increases the chances of user satisfaction.

Ideal for Both Web and Mobile Development

With JavaScript, ReactJS has a collection of rich user interfaces that support the apps irrespective of the platform. Furthermore, ReactJS has real-time reloads. It enables the developers to evaluate the results of the modifications made to the system in real-time. It plays a vital role in reducing the time consumed for web and app development. Moreover, ReactJS mobile web app development offers a modular architecture and a great ecosystem.

Not only does React ensure seamless performance, but it also promises highly testable applications. It makes it possible and hassle-free to develop a clear design that is test-friendly. Testing the application before releasing it in the market is recommended, and React JS makes it easy.

React JS offers the benefits of choosing any UI layout. In addition, it enables you to make essential data changes to transform respective UI elements automatically. Due to this advanced feature, you do not need anything to update the UI.

When you desire to migrate your old technology to a new one, there are multiple challenges that you must know and be prepared to manage. For instance, the whole code must be rewritten in some cases.

Thus, migration creates hassle resulting in a huge investment of time and effort. With react, you can write your code to the existing infrastructure at any instance. Furthermore, you don’t need to take stress about the performance while doing the process. You can choose the ReactJS development services of a leading React development company to execute easy migration of your old infrastructure.

It provides a unique abstraction layer

One of the USPs of React js development is that it offers a helpful abstraction that implies it does not disclose any complicated internals to the user. Developers must know a few basics and continue to examine the internal functionalities.

A theoretical advantage of React is that it isn’t limited to web advancement. Instead, it streamlines application engineers’ operations by incorporating portable and web advancement interaction.

A Few Types of Apps You Can Build With React.Js

Augmented Reality/Virtual Reality is a trending and promising technology in today’s digital era. With major tech giants like Microsoft and Facebook investing in the creation of Metaverse, demand for such applications will arise soon.

What makes React.Js a perfect match for AR/VR apps?

The front-end plays a crucial role in ensuring smooth eCommerce performance. For example, an event like a Black Friday or winter sale can repeatedly demand several changes. So, if your app is not created to handle such sudden changes on the front end, it can break your app demand in the market.

So, what’s the solution? The answer is simple: React.

React.js, by default, promotes the atomic design principle, which you can leverage for building eCommerce applications and optimized user experiences. In addition, you will get reusable components that can be employed in combinations to lower development time and quickly repeat when you need to make sudden changes.

Social media applications have seen significant growth in recent years. Applications like Facebook and Instagram have gained popularity to the level where no other app can beat them in terms of app downloads. However, it takes an incredible front-end that can handle the frequently changing content and enhance user experience.

React.js can assist you with the lazy loading approach, improving dynamic content loading. It comes with React.lazy, and React.Suspense that supports lazy loading of UI elements. Lazy loading is an approach that loads only the needed elements until users demand the rest.

In this section, we have highlighted a few top leading applications that are built using the ReactJS framework.

The React framework is used by Netflix, too – particularly on their platform called Gibbon, which is utilized for low-performance TV devices rather than the DOM utilized in web browsers. Netflix preferred the ReactJS library as it offers startup speed, runtime performance, modularity, and various other advantages.

The UI engineers at Netflix mentioned in the blog post:

“Our decision to choose React was influenced by several aspects, most notably: 1) startup speed, 2) runtime performance, and 3) modularity.”

Although there were numerous betas before it was officially released, WhatsApp employs React js for building user interfaces from Facebook, simply as it uses some of its most efficient engines such as Velocity.js and Underscore.js.

Even today, the all-latest WhatsApp Web app uses ReactJS to deliver a seamless experience to end users across multiple platforms.

The use of ReactJS within Instagram is at a significant level. The multiple features include search engine accuracy, Google Maps APIs, geolocations, and tags that pop out without hashtags. IT is all there in the app’s API – and it is really remarkable.

Instagram is entirely based on the ReactJS library and has let users completely adapt to its amazing features.

Facebook uses ReactJS. One of the reasons is that Facebook initially created the ReactJS library. Their webpage is built with React. The script is integrated into the application code. The mobile app is also developed with a version of React called React Native, which is similar, although accountable for displaying the Android and iOS native components instead of the DOM elements.

Most people may not be aware that Yahoo! ‘s mail client also uses React. Nowadays, there is a huge demand for a robust and unified architecture for applications, which is why React was incorporated in as numerous bits as possible. According to Yahoo! developers are adding it up as easier to employ React JS framework.

The engineers at Yahoo confessed in a blog post on Tumblr:

“For the upgraded Yahoo Mail platform, we desired:

In the end, we chose React JS and Flux because of the following reasons:

Hire React JS Developers With Your Team in India (YTII)

Designing your product front-end consists of several considerations, including responsive web design, user-friendly interface, support for web APIs, and a coupled architecture. React JS framework has the power to deliver this and take your business to new heights. But the key here lies in choosing the best ReactJS development company. Businesses must know they cannot leverage the benefits of the ReactJS framework if their app development partner is not a domain and technology expert.

Your Team In India (YTII) is the fastest-growing React js app development company in the software development market. Our clients include startups and large-scale enterprises. AT YTII, we provide offshore developers across multiple domains and technologies.

Get in touch with us with all the details about your project to get a consultation for your React js app development.

Is react js a promising technology?

In recent years, numerous web applications have been built using ReactJS. It enables developers to leverage the dynamic features offered by this technology. Furthermore, it helps deliver a great work experience and ensures a seamless web application development process. All such attributes make the technology a preferred choice.

Why is React better than other frameworks?

The quality of user interfaces is the topmost priority for any enterprise. React allows you to build rich user interfaces quickly and cost-efficiently.  You can easily retain your users if your web app has intuitive, high-quality UIs.

Yes. In 2022, React Native is the best choice for developing cross-platform apps due to its intuitive architecture, live reloading, fast development times, and code reusability between platforms (iOS, Android, web).

Is react js a good technology?

Yes. In recent years, thousands of web applications have been created using ReactJS, such as Netflix, Instagram, and Facebook. With React js, businesses can leverage the dynamic features of the technology for their application.

Is React good for large applications?

Both React and Angular are suitable for effectively building large enterprise-grade applications. However, it’s often a good idea to reach out to a dedicated React js development consultant who can help you understand what is best suited for your project needs.