React Native vs Flutter
Your Team In India

React Native vs Flutter is one of the most searched terms on the internet today. And the reason behind this comparison is that both of them are the best cross-platforms available in the market today.

Creating a cross-platform mobile app has always been the fundamental pillar of the technological world. While developing a new application or updating an older one, most companies prefer to choose a cross-platform framework.

Here are a Few Reasons to Go Cross-Platform Way for App Development:

Before moving ahead, let’s introduce these technologies and then begin their comparison on the basis of different parameters.

To make it short & simple, React Native is based on React, Facebook’s JavaScript library (used for building the user interfaces). Similar to the React for web applications, this framework allows the React Native developers to write a mixture of JavaScript and XML-Esque markup, known as JSX.

But unlike React, this framework targets mobile platforms.

Flutter is a mobile app SDK, which allows you to write your application in one codebase and compile it for both iOS and Android. Moreover, Flutter consolidates different processes into one cycle thereby reducing cost.

Flutter applications are developed using Dart, which is an object-oriented programming language. On top of that, UI of the Flutter is the combination of different widgets.

React Native Vs Flutter – What is the difference?

React Native and Flutter, both the platforms allow companies to have one mobile app codebase for the two operating systems (iOS and Android). Then what is the difference? Let’s find out:

Flutter clearly wins the competition on the basis of performance. Flutter makes use of great performance profiling tools, such as the DevTools of Dart Programming Language. The DevTools includes the Flutter Inspector – that helps the Flutter developers to visualize and explore Flutter widget trees. Furthermore, the compilation of code using C and C++ library significantly improves the Flutter app performance.

On the contrary, React Native developers face issues related to architecture, libraries, and native components, especially while building hybrid apps. If you are making react vs flutter comparison, on the basis of performance, you can definitely hire flutter developers and get your project started.

In case, of React vs Flutter, React Native clearly wins the battle. It’s simply because it has more native components for both iOS as well as Android. Since React Native doesn’t have its own library of UI components. Therefore, for making an interactive user interface, you may need the additional support of third-party libraries. Here is a list of the most commonly used libraries for React Native:

These widgets are built-in UI components & work as the replacement of native components. Plus, the layered architecture of Flutter, allows the developers to play around the application and provides them the control of every single pixel on the app screen. Not being biased, in this performance parameter, you should definitely go ahead with react native app development.

 React Native has one of the biggest USP; availability of ready-to-use components. Besides that, it utilizes the Redux framework to manage & track changes in application state. Additionally, the hot-reloading feature allows the developers to quickly review the changes in mobile UI. This significantly reduces the app development time.

Recommended Read: Why React Native is Better than Other Similar Platforms?

In the case of Flutter, you have to add separate files for both iOS and Android. Moreover, both these files require you to add the code respective of the platform rules. Apart from this issue, Flutter also has the hot-reloading feature, which allows developers to check the output instantly. This feature saves developers from making modification right from scratch. Hence, Flutter also provides rapid development. But when it comes to React Native vs Flutter comparison, React becomes the clear winner.

Documentation is always time-consuming. Yet, Flutter gives regimented & smooth documentation making it easy for the mobile app developers to refer while developing the app. Flutter has plenty of Integrated Development Environment (IDEs) and tool. Plus, Flutter has good compatibility with visual studio and this adds value to the framework. So, if you want crisp documentation, go ahead with Flutter development.

Stability is another important factor to consider while making React Native vs Flutter comparison. React Native is an already established framework, that has always been appreciated for its features and reliability. It also supports a large community of contributors.

Whereas, during the early days, the alpha version of Flutter was not recommended for large projects. The Flutter beta 2 version had a few impressive features for the developers. However, with a stable version release of Flutter in July 2019, things have changed a lot. Here’s what the new Stable Release of Flutter offers: 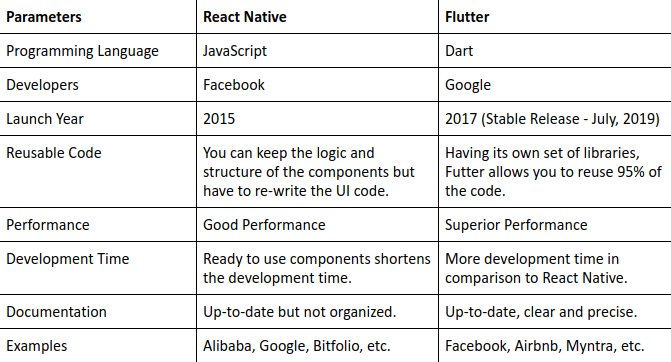 React Native vs Flutter – Who is the Ultimate Winner?

We have done a detailed comparison of Flutter and React Native, based on performance, documentation, stability, development time and user interface. However, it is extremely difficult to pick one as a clear winner. Both of these frameworks have some pros and cons.

We can bet confidently on React Native. Since Flutter has also become stable & mature, so, we are positively utilizing this technology. As a matter of fact, most of our clients are putting forward the demand for developing their application using Flutter.

Here’s one way to figure out which one is better!

If you would like to get a free consultation, we are here to help! Whether you are planning to outsource IT to India or set up your offshore development center, look no further, hire react native developer or hire flutter developer from YTII & bring down your development cost up to 60%!

Reach us at [email protected] & our team will get in touch with you shortly!