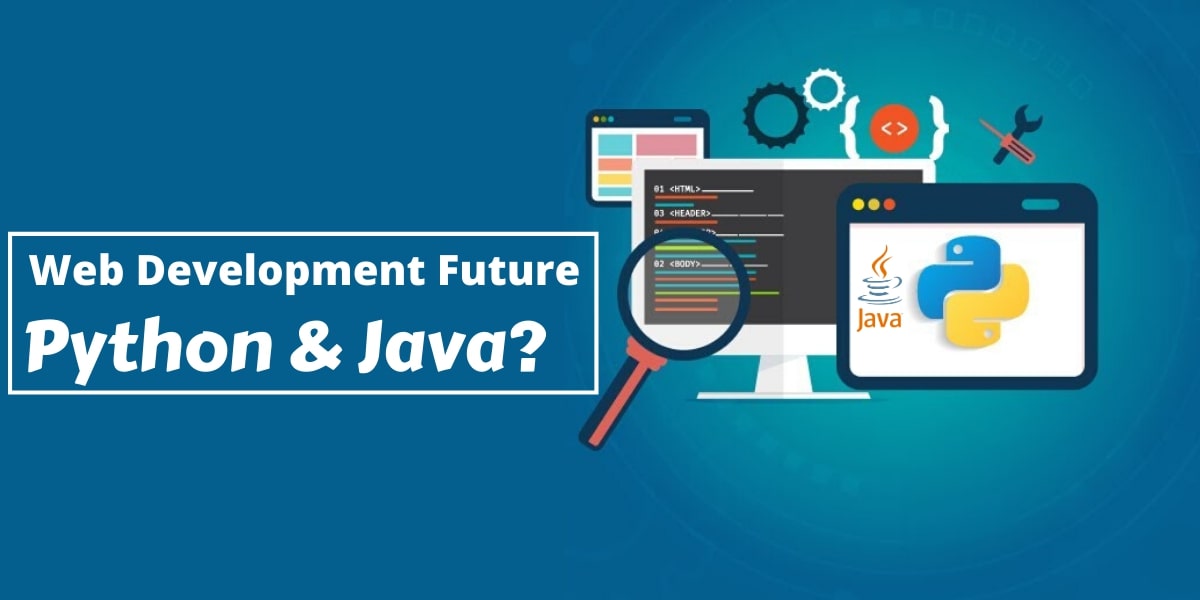 When it comes to the project and its realization, there are a lot of aspects that have to be taken into consideration.

Where the choice of the technology stack is one of the most important decisions as it defines how successful and smooth the project will be.

Depending on the requirements and ideas of the project, you should decide the programming language.

For startups, it is best to evaluate the development budget and balance between the time and efforts involved.

Today, there is a wide variety of excellent programming languages of the future for various purposes.

The future will be shaped by many emerging technologies but, Java and Python still remain the fundamentals

Therefore this article gives you an overview of the best coding languages that will shape the future. Python, as well as Java, are the two best programming languages today.

Python Future – As per the 2019 Stack Overflow Developer Survey, Python is the fastest-growing language of 2019. Do you know that Python managed to surpass Java?

Python proved to be one of the best when it dominated C# & PHP popularity in the year 2018 and 2017 respectively.

According to the TIOBE index, Python is continuously raising its rank and surpassing many prominent languages.

Do you know that there are 126,424 websites made using Python? All these stats prove that it is the language of today and of course the future.

Firstly, Python as a language is very beautiful, explicit, simple and easily readable.

Secondly, this is one of those languages that have the potential to be used in developing Android and desktop apps from scratch.

Furthermore, having understandable codebase, it is one of the most hassle-free languages of all time.

This is the reason why the best Python developers are in high demand and outsourcing has become the need of the hour.

Python is a multi-paradigm programming language having features like object orientation, function, procedural, imperative and more.

The language supports different operating systems like Ubuntu, Linux, Windows, etc. . This means if the Python developer codes on Mac, it will smoothly run on Windows.

Having extensive libraries and tools that improve the overall functionality, the language is easy to code. Here are a few libraries:

According to Stack OverFlow Report 2019, Python is in the top five when it comes to the most favorable programming language by developers.

You can hire a developer for python development outsourcing to make an incredible application for your business.

Whenever there is an issue, the Python community resolves the issue. You will also get innumerable ideas regarding the technology and the change in versions.

The language has much better code readability when you compare it with other languages. It utilizes white space indentation and not curly brackets for delimiting the code blocks

Whether they are start-ups or established firms, companies are using Python extensively to improve productivity and meet customer requirements.

Renowned companies are hiring offshore Python developers to make out of the box applications that run seamlessly.

Here is the list of the most popular companies that continuously deploy Python and the development frameworks:

Workflow Automation System (WAS) is an app coded in Python and created by NASA’s shuttle support contractor United Space Alliance.

NASA makes use of Python for open source projects like Astronomy Picture of the Day API.

Python is used for internal systems and API. This is done for report generation, log analysis, A/Q and testing, and writing core search algorithms are a few.

YouTube is a subsidiary of Google and takes the help of Python for viewing a video that accesses canonical data, controlling templates, etc.

One of the most popular entertainment media-Netflix is using Python as its core technology since its birth.

It is also used for Statistical analysis, automation tasks, visualization, and data exploration.

This animation uses Python as a scripting language for various animation jobs and related production.

Red Hat is an MNC based in the US. An installer is used called Anaconda which is coded in Python for installing Red Hat Enterprise Linux.

American MBC that uses Python for the factory tool control applications. The tools help in the collection of data, material entry, etc.

Why is the Future counting on Python?

You will be surprised to know that there are a few future technologies that are relying on Python.

Here are the technologies using Python as the core element for research, production, and development.

As per the October Report 2018, Python is the best choice for machine learning. There is a long list of Python frameworks, libraries, and tools that are created to direct Artificial Intelligence to reduce human efforts with enhanced accuracy and efficiency for development.

With the help of AI, speech recognition, autonomous cars and data interpretation have become possible.

The future of Python is clearly evident as it has helped big data technology to grow.

Python is successfully contributing to analyzing the number of data sets across computer clusters with the high-performance toolkit and libraries.

Networking is where Python has a future scope as the language is used to read, write and configure routers while performing other networking functions cost-effectively.

Here are a few Python libraries used for network automation.

Undoubtedly, the awesome benefits and performance of python and its libraries are working as the root of its constant growth.

This foundation is so strong, that almost all top-notch companies are using this language in their codebase.

Moreover, future technologies like AI and its subsets, big data and networking ensure a bright future for this programming tool.  It’s quite a secure and cost-effective programming language.

Finally, let’s switch to the next language Java.

Java is one of those few programming languages that has not just survived but has been dominating the market.

In 1995 James Gosling had a team of developers when he was working for Sun Microsystems which is now Oracle who created ‘Java’.

This general-purpose language is still the most common language used by the biggest brands.

Why does the language remain Reliable, Scalable and Simple?

Over the years, java language popularity has managed to prove time and again both the reliability and scalability.

And these two are important considerations when any development project starts.

Oracle can now report the usage of Java on more than 3 billion devices inclusive of PCs, smartphones and POS terminals, etc.

Key features of the language:

Java has an easy user experience for developers and users. The inbuilt libraries have the most significant advantage when compared to similar object-oriented languages.

Anytime anywhere language has a wide range of software and hardware.

There are strong security standards blends with safe programming.

Java is a network competent language. It receives and sends files informally.

Keeping Up with DevOps.

Till the year 2022, the DevOps market will reach up to $6.6 billion. So, it is evident that the technologies will shape the technology industry.

For this reason, if you are eager to have faster and efficient deployments, automation should be your agenda.

Here is the list of latest Java technologies in demand 2020:

The framework has an amazing ability to develop complex web apps acclaimed to high performance.

Enterprise-level applications are in Spring.

Spring MVC and Spring Boot are way ahead of Java technologies when it comes to development choice.

In this case, there are free modules that concentrate on one as spring utilizes Inversion of Control.

Having an object-relational mapping (ORM) database has completely changed the way we previously used to look at the database.

Hibernate has the ability to support multiple databases. This helps in scaling regardless of the app size and number of users. It is quick, powerful, easy to scale, modify and configure.

The answer is plugins. The plugins are for object-relational mapping and dependency injection.

Companies specifically LinkedIn, Samsung, The Guardian, and Verizon take the help of Play as speed, scalability, and performance are the key features.

Grails is an open-source framework that is continously becoming popular for the Enterprise Java Beans.

In particular, it is for scalable and robust app building for content management systems and e-commerce sites.

In addition to this, some benefits include multiple plugins, object mapping library, advanced plugin system, supportive and responsive community.

Java remains popular in the future as well

Java has more applications as compared to various other programming languages.

Moreover, there are apps that include the widest range of tools and technologies covering from mobile to web and then wearable to space science.

Along with Python, Java is another dominant programming language in Big Data. It handles large scale data in different frameworks.

Also, running in master-slave architecture has become popular among companies as it stores massive data.

Java is the Internet of Things (IoT)

As per Oracle, Java flexibility is a key reason why most of the IoT programmers use Java. In the same way, having an extensive library of APIs, it can be applied in making embedded applications.

Platform transition is smoother and less error-prone than other languages. Java has been a part of embedded devices from the very beginning.

Without a doubt, frontend and backend, both applications can be built with Java. This is what makes it a foundational language for Java remote developers or in-house Java developers.

Not only are they working on backend infrastructure like database integration or user authentication or front end app for user interaction, but Java is an important tool for the process.

When the current trend is embracing interoperability, Java has opened new partnership doors for other organizations.

For instance, OpenJDK and Jakarta EEE show interoperability in action.

Also, the future versions of Java help in API integration and support, modular open source libraries as well as the framework.

Frameworks like Kotlin and Java will also become increasingly popular. This clearly means that the future of Java remains dominant.

However, in the coming years, java for web development or other development will become more responsive to emerging trends in terms of development. This has a quick release cycle having extended support for reference.

This means that Oracle has managed to implement a hybrid approach to getting the best of both worlds in terms of stability and flexibility.

Both languages will be giving companies a competitive edge in the technological market.

Therefore, what platform you choose for development completely depends on your requirements but both python or java for web development has a promising future