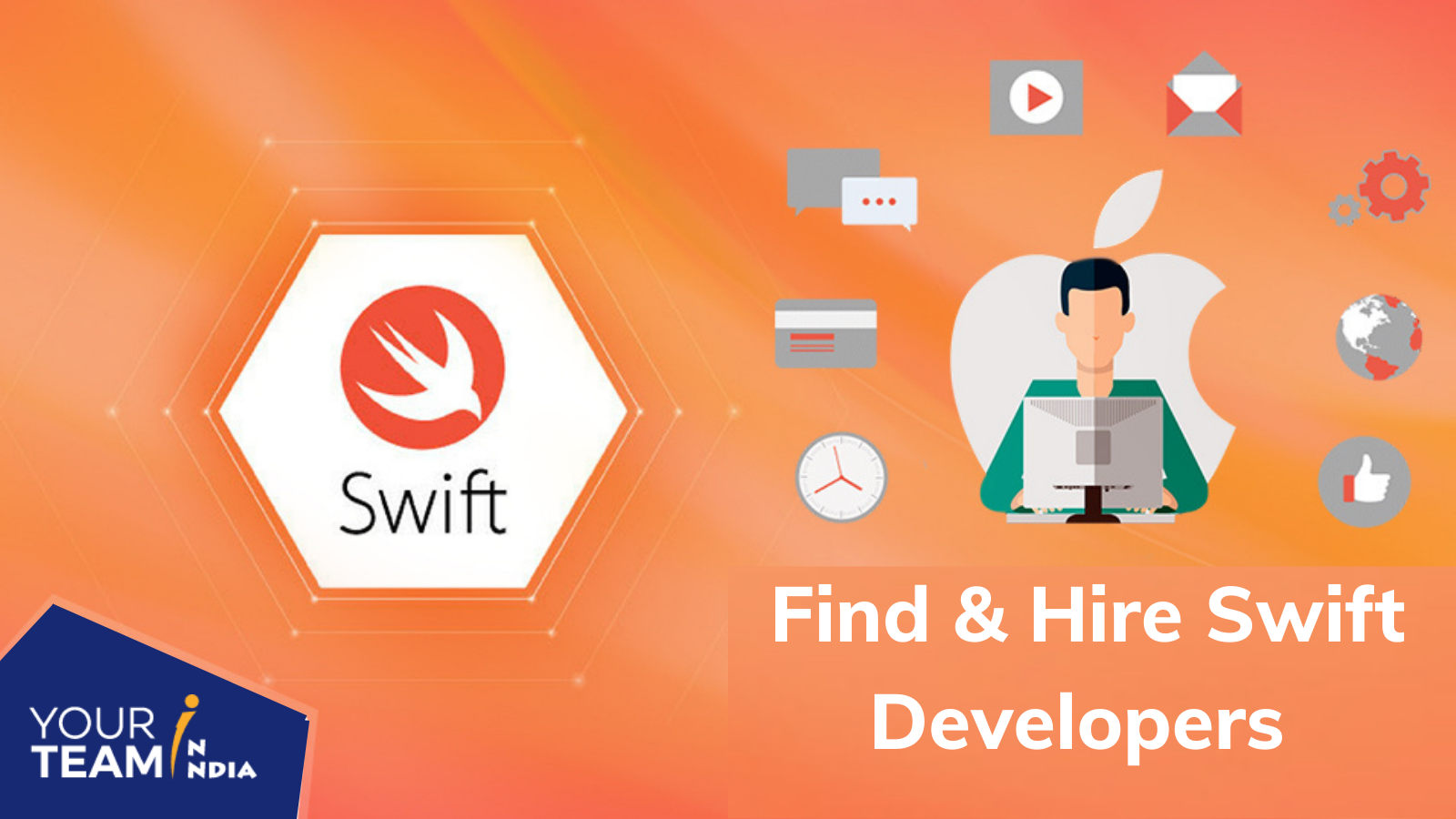 Hiring is not an easy task, especially when we talk about software development. While according to recent market share only 20.38% for Apple mobile devices, the iPhone users are known to spend more time online by using paid applications, non-digital products, and more.

iOS is also a prominent platform in various regional markets, like the US, Norway, France, and others. Also, if you plan to make revenue to satisfy your customers through an app like UberEats, Postmates, and more- it is better to hire appropriate swift developers.

Here, you may have various reasons for iOS App development, as this platform is more highly recognized than Android. It also requires less time to build an app for the platform. Additionally, there are also fewer devices that make the development using UI and UX much easier for iOS platforms.

But, how to hire swift developers?

Well, if you are thinking about the same here, then you are at the right place. In this guide, we will help you to hire the best specialist for your upcoming project.

What Kind of Developers do you need for Swift Development?

Apple makes sure for iOS development to create a uniform affair with coding languages, Frameworks, and more. Now, that’s why the entire iOS development model revolves around Swift.

Swift is an exclusive programming language developed by Apple. The model is very much a thing of the company. This is why a Swift Developer requires to have the following experience and skills:

Everything else is also included in the Swift Platform. This includes the testing system solutions used for macOS and iPad. Talking about the additional experience with iOS App development is compulsory to hire swift engineers for the positions for senior and middle-level.

Many business owners fail to understand the scope of roles & responsibilities of Swift Experts. Instead, the borders implemented for developers go much beyond just writing codes.

Pro-level experts tend to take part in every stage of application development from planning and considering the aspects to testing and publishing the app to the store. In other words,  a Swift Developer turns the features and specifications of a software application into an efficiently working and easy-to-navigate product.

While you are on a hunt to find swift programmers, design and framework awareness are what you should really pay attention to. Here, the point is that both designers and developers are in charge of adding quality to the product.  Your developer must have experience with both UI and UX and Swift programming.

Generally, the versatility of the Swift Developers is dependent on their working skills and experience. Respectively, the more apps a developer has worked on, the more complexity they can handle. In the software development industry, the skills of developers are divided into these levels, and they are:

Taking everything into account, you can choose the right developer as per the project’s need. Here, the key factor is the project’s budget, salaries of every level (as it can vary on a large scale!), and experience. The complexity of the project also matters in this case, as a junior-level developer will not be able to cope up with a large project.

Aspects to Look For When Opting to  Hire Swift Programmer

Once, you decide what level of swift developers you want to go for, here’s what you need to do to take a step ahead:

However, the years of expertise Swift developers have in developing an app is not a marker of their full-on-experience. Therefore, you must focus on the number of projects the expert was previously involved in rather than just working as a developer. Otherwise, you will be at risk of hiring a narrowly experienced developer with limited skills for your project.

Setting Yourself Up to Hire Swift Engineers

So, before you start up with the hiring process, learn about your project completely inside and out. This is why the only way to make sound decisions is to set yourself upright for hiring the best iOS Developers.

Below are a few tips that will help you to get through this process:

The hourly rate of Swift developers is one of the crucial factors of most businesses. These rates may vary on the hiring option you choose from along the region you are inclined to hire from, be it an in-house team or you want to hire remote iOS developers.

The salary in the country may vary from state to state since every region has a different population in terms of the talent pool and different costs of living.

Here, the actual cost to Hire Swift Developer depends on several factors such as project type, project requirement, Outsourcing country (if you want to outsource software development), and more.

As the salaries or the cost of hiring ios developers and other tech workers in some regions of America (the northern region to be specific) is quite high, you are expected to pay bills with lots of zeros.

Whereas, at the same time, Asia is pretty cheap! You can easily hire Outsourcing development companies in India to get your job done within the budget.

In case you are looking for options that suit you the best and are on a budget then you should consider India or companies based in Eastern Europe. The reason you must focus on these countries is that these countries are listed on the top of the most favorable outsourcing destinations.

Tips to hire swift developers: Use Clutch to find companies by countries and then pick the most reliable one or click here to know what makes India the best destination to outsource software development.

Now that you are acquainted with the roles and responsibilities of Swift Developers and know what skills to look for, let’s now move to understand the hiring options that you have in hand.

As a matter of fact, there are the following main options to find iOS developers. They are:

Not sure which one to choose and how to hire swift developers?

We have sorted it for you!!

When to Hire a Freelance Developer for Swift Development?

Hiring a freelance Swift developer is the most common option when it comes to software development services and it is not a problem to hire someone who would make that perfect app for you.

However, freelance iOS app developers may not be the best option, if you are looking to have a long-term cooperation. Also, it may be more reasonable to hire freelance or remote swift programmers.

Also, it will be more reasonable to find a freelancer to complete a project for a specific time frame. For example, you can hire a freelance swift developer to fix the bugs or perform certain tasks such as adding features to a ready-made app.

You now may be wondering about where to find the best freelance Swift developers? There are several websites that allow you to hire freelancers from all around the world, like Upwork, Toptal, Freelancer, and more.

Freelancers love these platforms and this is why you will not feel a lack of talent on them. Additionally, you can hire the perfect candidate by using the filter search and by going through the profiles thoroughly.

You can also find the candidate on LinkedIn or Twitter and hire them as a freelancer. So, finding iOS developers is quite simple, if you know what kind of professional you want and where to find one online.

If you have a technical background, you can use GitHub to find the perfect talents judging from the project they have worked on in the past.

Pros When Opting to Hire Swift Developers: A Freelancer

To learn if the developer has the required skills, you can go through their portfolio or ask them directly. If you are considering a Swift app development company then try looking for a dedicated page or case study on their official websites.

When to Build an In-House Team of Swift Developers?

If you are a startup looking to have a balanced solution for your software development, having an in-house team is the best viable option for you. The viability comes when you publish the product and see what your users think about it. This factor alone will help you to analyze the profit in the coming future.

Thus, you can start with allocating the resources to the other staff and hire dedicated Swift Developers to work in-house. It is definitely not the best strategy for all the startups but still a considerable option to go for.

Also, hiring an in-house tech team is more sensible for a few middle-sized companies and enterprises that build industry-specific apps with complex business logic having the constant cooperation between the Swift Developers and other departments.

Pros of Hiring an In-house Team of Swift Developers

Cons of Hiring an  In-house Team of Swift Developers

When To Outsource your Swift Development Project?

So, if you are looking for a cost-effective way to hire Swift programmers, then you need to look for software outsourcing companies in the industry. There is two cooperation model that you must know before contacting a software development company, and they are:

Rule 1: You can hire an iOS app developer (one, two, or more it’s up to you) and pay the company on an hourly basis. This model is also known as outstaffing or hiring a dedicated team. If you choose this model, all the management and related aspects come on your shoulders. It is because the hired developer will only be limited to the existing team or carry out your tasks.

Rule 2:  You must contact the representative of the outsourcing company, explain to them the requirements to build an app for you. In this case, all the management aspects along with the responsibilities for the entire development processes lay on their company.

You can also search for outsourcing companies on platforms like  Clutch or GoodFirms. You just can use these platforms to know about the firms in the best way possible.

Software development is one of the major key services that we provide to our customers. Our Swift developers have successfully completed several projects and released dozens of applications online.

The Swift Developers work with Oops, Objective-C, and Swift programming languages.  Moreover, most of our projects are built using Swift. It has a variety of benefits that allows you to speed up your development process and creates quality products.

At Your Team in India, we follow agile methodology to provide our customers with complete transparency and flexibility. This methodology allows our client to see the outcomes after every milestone and make changes to your product if required.

At last, we really hope that by any chance this unique guide can help you to overcome hurdles in your way to hire swift engineers. If you have any questions on what all services we offer at Your team in India– Click here to contact us.