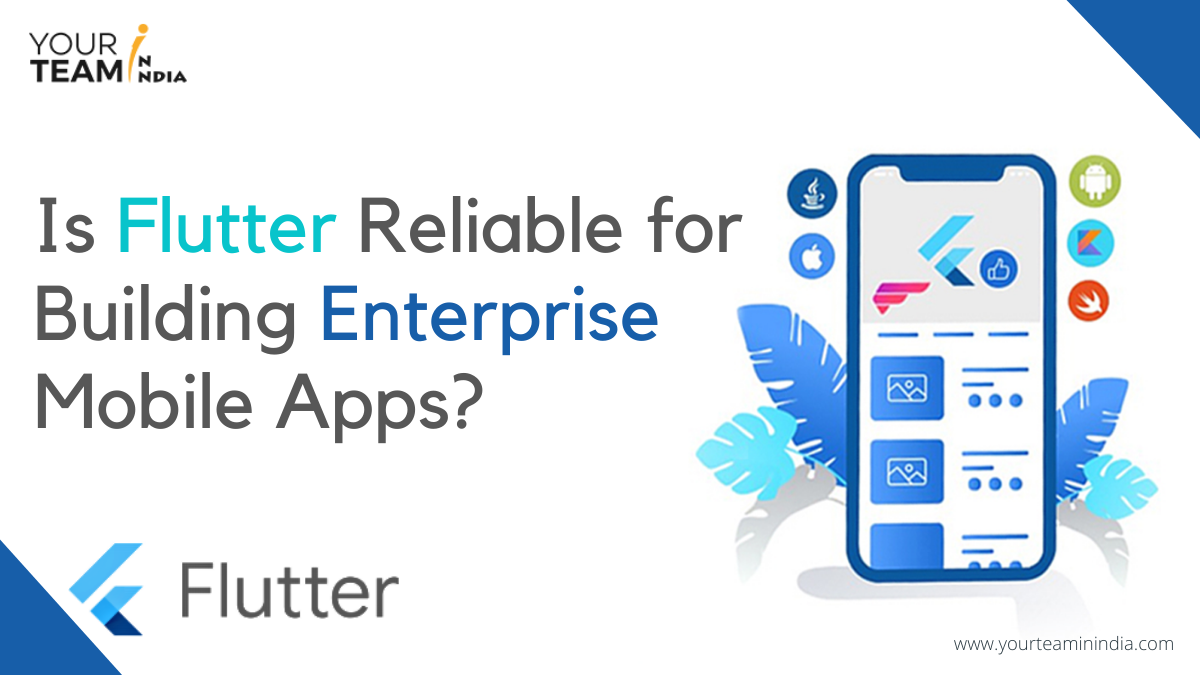 Is Flutter capable of developing enterprise apps? This has long been one of the most frequently requested questions among developers. This platform, however, has shown a lot of promise since it was released from beta, with an overwhelming number of native capabilities that make native app production easier.

While it is true that the mobile app development industry is heading toward a more complex app development process, the separation of iOS and Android app development is one of the most significant hurdles. Businesses must keep this in mind when targeting their audiences to guarantee that they do not miss out on any of the markets because users of both operating systems may be found all over the world.

Google states that its software development kit is used by 500,000 developers on a monthly basis. The question of whether to utilize Flutter or React native is one that comes up regularly. In terms of popularity, Flutter is rubbing shoulders with its nearest competitor React Native, and it may soon overtake it. Because of a resurgence of interest among enterprise mobile app developers.

However, why is this the case?

We’ll discuss how mobile app development with flutter is becoming more serious, and for the better, in this blog.

What Exactly Is Flutter?

An open-source and cross-platform UI software development toolkit are some of the characteristics of Flutter. Its codebase provides a collection of features that may be utilized not just on iOS and Android, but also on Mac, Windows, Google Fuchsia, Linux, and the internet. Dart, Google’s object-oriented programming language, is used to create Flutter apps.

This is because it offers benefits such as greater development productivity and a solid, object-oriented software structure.

Because each organization has its own set of expectations, the needs for fully functional front-end and solid back-end technology change from one company to the next.

The following parameters must be addressed when addressing mobile applications for businesses in general.

Enterprise apps need architectures that allow for unambiguous separation of concerns into layers, so that they may do things like:

This leads to increased productivity across a broad team of developers’ various skill levels.

For their Flutter IDE, developers can select between Android Studio/IntelliJ and Visual Studio Code, as both are fully supported on Mac, PC, Linux, and Chromebooks. These IDEs, as well as the command line, can be used for building, device deployment, debugging, and performance profiling. Xcode on a Mac is required for native iOS platform development and deployment.

It’s vital to remember that understanding how to build and sign apps, as well as how to create provisioning profiles, is required to build a successful Flutter app. Another important Flutter developer skill is debugging in each native platform and learning how to interpret the stack traces of the two platforms.

The focus of enterprise mobile apps should be on offering a great user interface. Flutter includes a rich range of highly accurate Android (Material widgets) and iOS reproductions (Cupertino widgets).

It’s frequently a necessity for a company’s mobile app to be able to access device functions like:

NFC. Note that only a fraction of NFC tags are supported, and NFC application usage on Apple’s iOS platform is severely limited by design. This isn’t the result of a Flutter bug.

As a Flutter app development business, we feel compelled to point you to the following additional benefits that this open-source toolkit provides:

Flutter is well-versed in and well-known for producing high-performance applications. With its growing popularity, Flutter is being used to design mobile applications for businesses, allowing them to make use of all of the interesting features it offers. Flutter can help you build enterprise mobile apps in a variety of ways.

As can be seen from the information given, Flutter has a library or solution for a wide range of enterprise mobile app requirements. With a thriving Flutter library package ecosystem, it might be time to hire a Flutter App Developer for your next Enterprise app.

At your Team in India, we have a team of flutter experts. If you want to hire Developers or have any questions on what all services we offer at Your team in India– Click here to contact us.