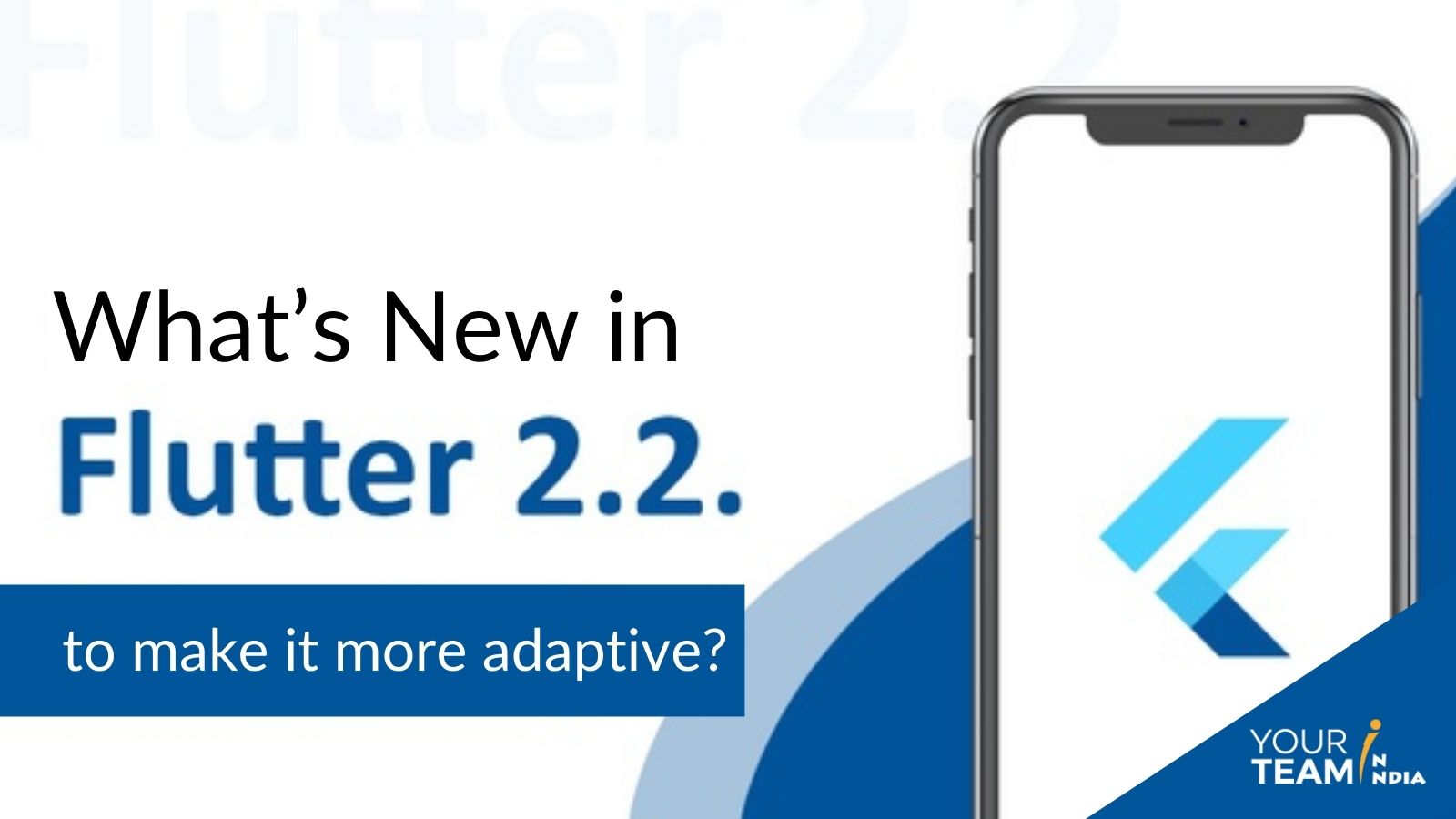 On Google I/O 2021, Futter 2.2.0 was announced. And, since the massive premiere of Flutter 2.2.0, Google has pretty much been excited about developing this framework. Perhaps, that’s why those worrying about the mobile cross-platform earlier are now at peace as Google is leaving no chance to leave a mark to place its best foot forward to develop this framework.

“Flutter 2.2 is the best version of Flutter yet, with updates that make it easier than ever for software developers to monetize their apps through in-app purchases, payments, and ads; to connect to cloud services and APIs that extend apps to support new capabilities; and with tooling and language features that allow programmers to eliminate a whole class of errors, increase app performance and reduce package size,” Google’s Tim Sneath says.

This post will show you the top reasons they have made this framework more adaptive for Flutter app development.

What’s unique about Flutter 2.2.0 that makes it more adaptive for us all is that it notices its community by organizing social media initiatives. The community has always been an integral part of this framework. It allows developers to manage the core widgets, and they add famous packages to Flutter favorites. You can even check out a few of these packages in the tutorials.

Google helps you realize that Flutter belongs to you (the users) and not to some alien group. Furthermore, it is adaptive because most Software developers find it absolutely perfect for building their product due to its warming community environment.

That’s what Google did with Flutter 2.2.0 – it recognized the worth of its community. Even the provider package, created by Remi Roussel, is now at your fingertips to be debugged in DevTools.

Google is working with a community on a package that will allow Flutter app developers to utilize the Cloud functions in Dart, which by the way, is an extraordinary approach to support serverless solutions.

Dart on the backend has been in existence for quite some time now, and projects like Aqueduct or Jaguar are proof of that. Besides, just having Flutter app developers working on both backend and frontend is advantageous. With everyone having similar concepts and knowledge about a particular project and it is written in one common language, it is pretty easier to make any project a success.

With Flutter 2.2.0 having  Dart 2.13 that supports Array and packed structs in FFI and type aliases, Flutter app developers will be able to enjoy a better ecosystem around this framework. Programmers will be enjoying Docker image as well as GitHub action for installing DartSDK apart from updated Adobe XD to Flutter Plugin and Alpha of Flutter Support for UWP apps.

Type aliases make it possible to cut short the long names and rename the classes in a non-breaking way, making it more convenient for the users to follow the development process. Read our other post about how flutter is setting a new trend in 2021.

It was earlier an issue with most of the iOS users that Flutter is absolutely useless for them. With the Flutter 2.2.0 announcement, a ray of hope has shined for iOS users. From a developer’s perspective, it might just be a petite matter, but it is a serious concern for the users. Eventually, they would end up uninstalling the app and never come back.

Google has introduced the idea of caching shaders so that users are not removing your app on facing issues like bad UX, non-performant animations, and long loading indicators.

What makes Flutter 2.2.0 more adaptive is the fact that it is all set to build great experiences. Flutter helps coders create great experiences by removing the traditional impediments to reach the end-users.

Google wanted to make Flutter apps behave the best, for which it has come up with better scrollbar behaviors in this release. On iOS and Android, the scroll bar doesn’t show by default; however, it does show on the desktop. To get the scrolling right, this release automatically adds a scrollbar, as and when needed. Hence, coders will not have to worry about the scrolling thing anymore when doing flutter app development. Flutter is an emerging platform in the tech world in recent times that is driving a revolution in the growing world of business. Due to its vast features, it has become the first choice of startups.

Improved Flutter release supports the areas, which were earlier important on mobile form-factors as they were on desktop form-factors. Text handling is one such area where things will be more interesting now after the announcement of Flutter 2.2.0.

Programmers will experience refactoring how the text input is handled, including canceling the keystroke as it bubbles through the widget. Read our other post on reasons why Flutter is more popular for app development.

This feature of Flutter 2.2.0 to cancel the keystroke allows Flutter to implement spacebar and arrow keys without really bothering the scroll events. Together it gives the end-users the ability to experience more interesting and interactive apps. Moreover, developers can tab between the button in the Flutter app and TextField too.

Custom text actions enable professional developers to handle the Enter key in a TextField. These text actions allow Flutter itself to provide numerous keystrokes to match text editing behavior, allowing a better experience for both the engineers and the users.

A lot has still to be done on the same. However, complete text editing actions are now being given to the developers. The fundamental purpose of the Flutter release is to make it a stable framework for building interactive apps.

The broader ecosystem makes it more adaptive for the developers and the users as well. For several months, the area of growth in Flutter has been in broadening the network of Flutter to almost every platform that exists and OS. Besides, its nature of being available on open-source is what makes it more appealing to the Flutter app development. With this enhanced Flutter support, engineers can collaborate on the same assets while putting innovative ideas into action and products faster than ever before.

Flutter 2.2.0 is Safe to Be Concluded More Adaptive

With that said, Flutter 2.2.0 is a more enhanced and much-improved version of what developers have been using for Flutter app development. Did you know there are more than 200000 Flutter apps in the Play Store alone? Hence, we expect Flutter to be more adaptive and reliable after the release of Flutter 2.2.0 and much more reliable for app development than it ever was.

Need help setting up a dedicated team of Flutter developers in India? Connect with us our business head now and get a free consultation.