Since the launch, React Native has made it easy for a startup to launch a mobile app in the market. The platform is amazing and comes along with loads of features that make it one of the most promising mobile app development frameworks.

Let’s assume that you are planning to launch a mobile app for your business? If you choose the traditional way, that is native apps, then you have to hire iOS app developers and Android developers separately.

That’s where React Native steals the show. Of course, it is a cross-platform framework, and thus, allows you to build mobile apps for all the platforms simultaneously.

But there are other cross-platform frameworks available in the market. So, why are we stressing on React Native? Let’s find out!!

Why React Native is Better?

Since the launch, React Native has surprised every tech enthusiast in the mobile app industry. Because this programming language fulfilled the purpose of its development i.e to overcome the limitations imposed by the hybrid apps.

The Rise of React Native Apps

Let’s take a look back at the rise of react-native applications. It all started with deep regret of Mark Zuckerburg, the CEO of Facebook, in 2012, saying that “The biggest mistake we made as a company was betting too much on HTML5 as opposed to native”.

The difference in the popularity of react native and all other frameworks is huge. Here’s a glimpse according to the google trends: 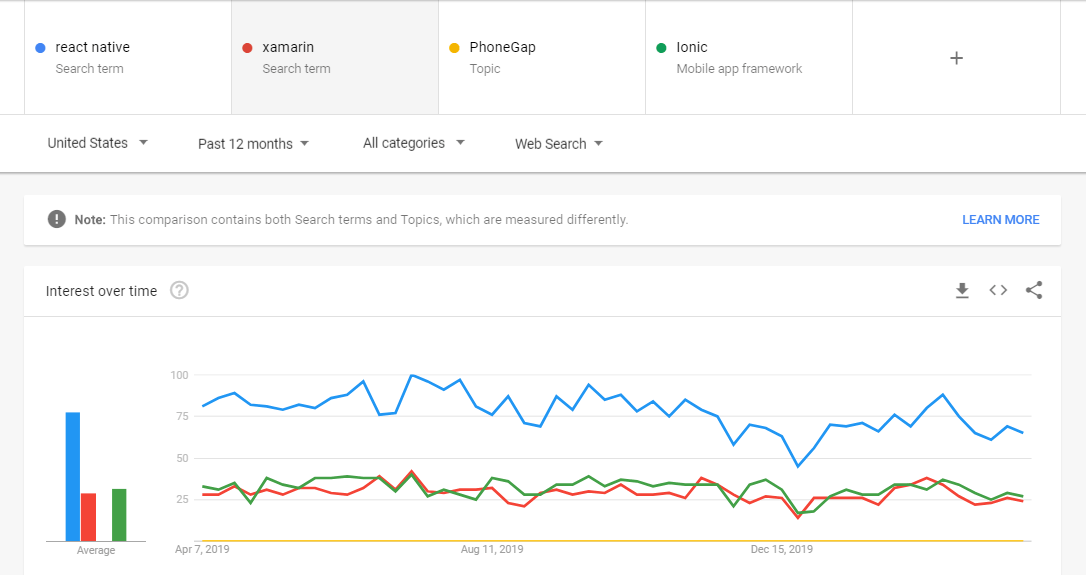 React Native is an open-source framework with one of the largest support communities. Unlike typical hybrid applications, this new framework targets mobile platforms.

It’s based on the JavaScript library, React Native allows you to create a single javascript codebase that will work on different mobile devices (iOS, Android & Windows).

Based on the bi-annual Developer Economics survey, more than 9.7M developers use JavaScript. One more report justifies the above statement.

According to a survey by MarketsandMarkets, Cross-Platform development is rapidly increasing & estimated to generate $80.45 Billion in the year 2020. It simply depicts that the cross-platform approach is becoming the first choice of developers & startups for mobile app development.

So, before moving ahead, it’s important to understand why cross-platform development is becoming popular.

But this alternative was a time consuming & expensive approach. Therefore, a large chunk of entrepreneurs started using hybrid apps.

Although React Native was originally introduced for iOS. Having amazing abilities and features, Facebook created its support for Android.

Due to the more advancement in the framework, now it is easy to embed native code to impart platform-specific authenticity. This further reduces the development cost and time to a considerable amount.

According to the aforementioned, there are instances where you have to be platform-specific like design implications are different on iOS and Android. React Native offers a solution to this problem as well.

The above advantages of cross-platform make it an ideal approach for mobile app development. However, it also leads to confusion. It’s because there are numerous platforms available that offer a seamless development process.

What do you think a user might expect from a mobile app? The answer is an excellent, personalized experience & real-time information.

Nowadays, it’s not easy but possible to impress users. You just need a mobile application that is performance-driven & cost-effective. Therefore, startups consider this programming language and hire react native developers on top priority.

In fact, it’s modular & intuitive interface makes it easy for the developers to transform web apps into mobile apps.

For all the above reasons, it is also an ideal solution for the development of MVP. Without spending a lot of money, you can get your mobile app running within a short time span.

Hence, it would be fair to say that react native apps are the future of hybrid apps. But a lot of entrepreneurs & mobile app developers might be looking for the comparisons like ‘Ionic vs React Native’, ‘React-Native vs Xamarin’ or ‘React Native vs Phone Gap’.

So, here’s a quick comparison of all the four platforms:

What Does React Native Solve?

Advocating the learn once, write everywhere method, React Native successfully solved core issues which were prevalent prior to the launch which includes:

When you are planning to build an app for a startup, money is an important factor.

If you want to create a mobile app for both iOS and Android but have a tight budget, then a cross-platform mobile app is the right approach. Cross-platform apps are budget-friendly, as you only need to hire developers for a single technology.

The app’s success depends on time-to-market. This actually represents the total amount of time it takes for a product to move from conception to the market launch. If you are planning to enter the mobile app market early, the cross-platform framework is the right approach.

While building two platforms simultaneously, you can capture a large user base from both the markets.

If you have a different plan for upgrades after launching the first version of the mobile app, native development is the best fit for your business. It will certainly cost more as going native makes it easier to manage the frequent updates.

When you don’t anticipate post-launch upgrades, the native app development is a less valuable investment.

With the extensive use of JavaScript, developers can push the updates directly to the user’s phone and not via the app update cycle.

Users enjoy this up to date version. Moreover, the complete procedure is streamlined and simple. Mostly, Microsoft’s live update service CodePush SDK, this integrated with the React Native app to push notifications to the app.

This results in lower app load time when compared to a typical hybrid app.

6. Write Once and Use Everywhere Code

By far this is the best feature. The code written in React Native works on almost every mobile platform. Including iOS, Android, Windows, etc. There is no need to write code on Swift for iOS and Java for Android or C# for Windows. The applications are native working on multiple platforms.

Today, performance is the only differentiating factor between popular and unpopular mobile apps. Reduction in the app load time is the biggest challenge faced by mobile app developers.

React Native enhances the mobile app developer’s experience. The major prerequisite to which is time reduction while saving the file and viewing changes. The framework successfully achieves this goal with the ‘Hot Reload’ feature that works like magic. This feature is available in React Native 0.22

Walmart has proved to be its innovative attitude way to introduce Node.js in their stack. Years later it was revised into React Native.

Walmart improved the performance of the app on both iOS and Android with the help of fewer resources and within a shorter time. 96% codebase is shared between platforms while the skills and experience of the mobile app developers were leveraged across different organizations. 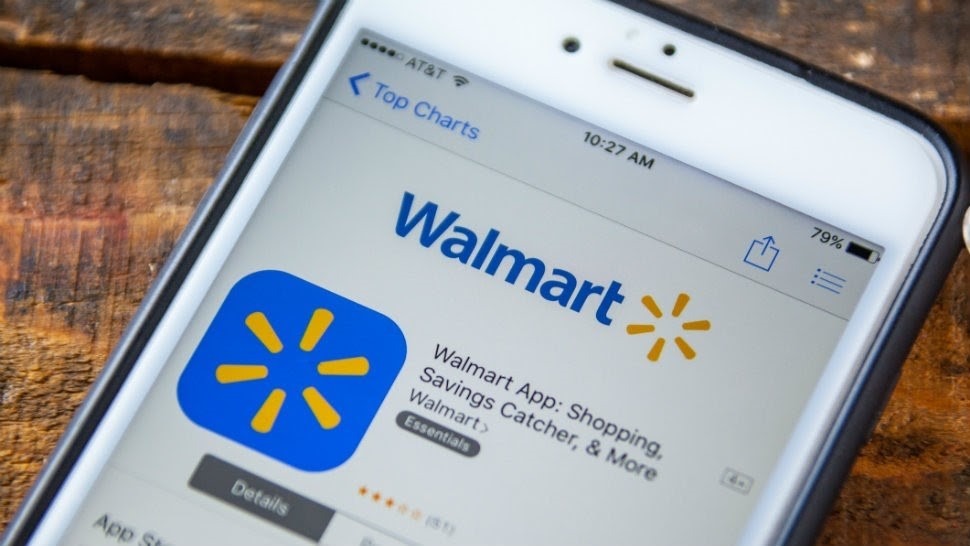 Walmart is striving to become the world’s largest online retailer. Having high expectations, the company wants to make a bold move involving high risk to gain a competitive advantage. They look for different ways to enhance the ways to improve customer experience by trying new technologies.

A development team created an app using React Native and the primary tool delivering the promise of cross-platform development.

Why did Bloomberg Choose React Native?

The consumer mobile app was a huge endeavor because we had to transition the entire organization to React Native“ says Gabriel Lew, a senior application engineer at Bloomberg office who led the development team’s effort. (source)

React Native automates code refreshes while accelerating the release of new product features. The app instantly reloads rather than recompiling.

Instagram accepted a challenge to integrate React Native in the existing native app starting from the simplest view. The Push notification view that was implemented as the Web View: there was no need to build navigation infrastructure as UI was very simple.

The Instagram development team stated that they substantially improved developer velocity. 85% to 99% code was shared between Android and iOS apps. The team delivers the app faster than they would have built native solutions.

React Native has the highest performance among cross-platform frameworks. Apps with this technology have a native look and feel. Indeed, React Native is better & unique than other similar platforms.

It is an excellent framework that is easy to learn & offers good performance as well as an interface that is comparable to native apps. Moreover, some technology enthusiasts consider that react native apps are the future of hybrid mobile apps.

All in all, it’s a win-win game for the organizations that want to satisfy the customers with a tight budget. What else do you expect from a cost-efficient solution? Leave your thoughts in the comments section below!

Want to build your team of react native developers in India? Set up your offshore development center with us & get started with your app development project.

I am working as a Digital Marketing Specialist for Signity Software Solutions. With 4 years of experience working for different business verticals, I am apt in creating marketing strategies that work well for B2B as well as B2C businesses. Besides working, I love traveling, interacting with new people and watching videos that add value to my life.