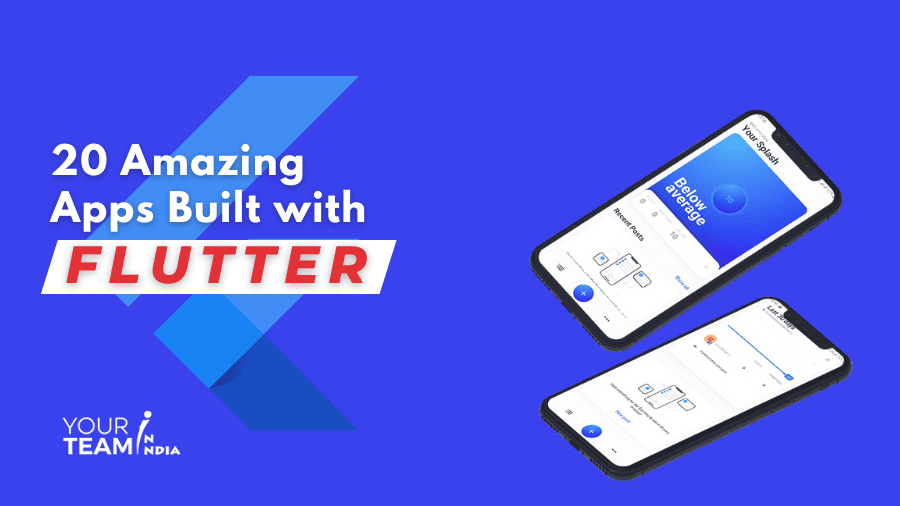 Flutter, a popular cross-platform framework, is quickly becoming the first choice of developers for building applications. According to a 2019 polled survey, Flutter was employed by 30% of developers.

In 2021, Flutter surpassed React Native with 42% to React’s 38% (Source). This continued trend showcases how Flutter is becoming the dominant Framework, with over 50% of polled developers using it within the year.

Let’s explore more about the trending apps built with the framework.

Here is a list of popular enterprises that have built their apps in the Flutter framework to create a competitive advantage in the marketplace. We take a closer look at the applications established worldwide and enable companies to leverage the advantage of material design, hot reloads, and other robust functionalities of Flutter.

Alibaba is a renowned name in the eCommerce industry that has developed its application using the Flutter framework. It is one of the popular web apps built with Flutter, enabling its clients to buy items from global providers.

Flutter framework’s capacity makes it easier to measure eCommerce transactions. Using Flutter’s in-built features, Alibaba has been prepared to manage the expanding number of worldwide transactions in the commercial center.

Reflectly is one of the renowned apps built with Flutter and users love it worldwide. This mindfulness web app is known for its beautiful look, easy navigation, and detailed features.

Reflectly was one of the first apps created using Flutter.

The Reflectly team chose to develop the app using Flutter because of Flutter’s excellent integration with Machine Learning as well as the NLP technology that the app uses. The app works wonderfully on Android and iOS alike and has wowed many users with its features.

This mobile app enables users to buy and sell vehicles using their smartphones. They can browse the offers, publish advertisements, and bid for the cars they like with just a few clicks.

The eBay engineering team was facing the challenge of limited time as they had just one year to hit the market. In addition, they also wanted to deliver an impressive user experience that would contain all the features known by eBay users.

This was when they decided to build their app using the Flutter framework in its 1.0 version. The main advantages included almost a single codebase, speedy programming, and awesome UI.

The Google Ads application is the most used and popular app in the market and was built using Flutter Framework. It has been a renowned digital platform, helping customers to promote their advertising efforts, product features, suggested videos, and so on with no hassle.

Since Google is the foundation of building– Flutter and Google Ads, there are a lot of cooperative components created in the web application. In addition, this application has employed Flutter’s technological specialized skills incredibly.

PostMuse is an Instagram application that alters stories and provides users with an extensive collection of typography, frames, edges, and more.

Users can easily access it on Android and iOS both. Also, this app can put stories based on their imaginations. This app built with Flutter also helps suggest the best picture so your social media marketing looks authentic.

Lunching is a cross-platform food delivery app that makes it easy to order delivery food. It is one of the booming food delivery apps made with a flutter framework built with a new architecture. A user can easily create an order using the app. Huge payments can be made, or paid users can go for smaller installments to make payments.

Hamilton wanted to develop its mobile app that is supposed to run on Android and iOS. The team picked the Flutter framework to ensure Broadway musical lovers do not miss the biggest events.

This Flutter-based app helps users get access to news, tour schedules, and videos, as well as purchase Broadway musical merchandise.

In the mobile app, users can also participate in new Hamilton lotteries and contests and be the first to know about new events. Hamilton chose Flutter instead of going with native apps for Android and iOS separately to develop the app quicker for multiple platforms.

Philips Hue is a smart-home lighting framework. They market bulbs, lights, and starter units for customers who need smart lights in their homes. They have two flutter-based apps – Hue Sync and Hue Bluetooth.

Philips Hue has employed Flutter since 2018 and chose this technology even though other great solutions were available. With Flutter, they had confidence that it was an ideal choice for their project.

Coach yourself is a fitness app that enables users to add value to their health and personal development. In addition, it offers meditation sessions and insights features that allow users to track their progress.

They have built their app with the Flutter framework because of its native-like performance and feel. It’s also very easy to develop complex features in Flutter by employing widgets that make it hassle-free for developers to work with this Framework.

Cyrptograph app allows users to monitor and track the latest updates on over 1600 global cryptocurrencies such as Ethereum, Bitcoin, Dogecoin, and Ripple.

The Cryptograph smartphone app, built with the Flutter framework, provides real-time insights in the form of exchange rate maps, helping users to monitor the market movement history of their desired cryptocurrency.

The software displays currency exchange rates, allows you to pick and add coins to your Favorites for speedy monitoring, and many more.

Watermaniac is a leading app that was created using the Flutter framework. It is used as water drinking trackers. The design of this flutter-based app is quite simplistic, which would be expected from such a product.

It also has all essential functionalities such as archiving logged drinks, setting goals, and push notifications as reminders. If you explore the list of all Flutter apps, you will realize that many similar apps were built with this Framework.

With the Rive flutter app, developers can seamlessly create and ship beautiful, interactive animations to any platform. In addition, their open-source runtimes make it feasible for developers to animate once, then release it on any platform they like.

Rive created their features entirely in Flutter. Their codebase is now considerably easier to maintain and allows developers to onboard and start writing code immediately.

With the Stadia flutter app, anyone can get into games hassle-free. It allows users to dive in with the hardware they own. For gamers who like to experience a next-level adventure, Stadia is the best platform. In addition, it offers a customized controller that functions across desktops, tablets, laptops, phones, and TVs.

While ensuring delivering a seamless user experience by creating an intuitive design, the Stadia team turned to Flutter.

Plus, the flutter open-source platform allowed them to ship the Stadia app for both Android and iOS with just 500K coding lines — combined.

BMW is moving forward with the digital transformations and rollout of their My BMW app that was built using Flutter. This vital interface in cell phones, along with vehicles, made its opening in July 2020.

Tencent’s aim was to create a smooth and excellent experience for all their users, no matter which product they were connecting with. This is because their applications are universal – they help with work, studying, traveling, and many other daily activities.

Using Flutter has already allowed businesses to ensure their apps develop and iterate faster so they can focus more on the user experience. The New York Times built their KENKEN game available on the web using Flutter.

This financial app is built using Flutter and helps in managing credit cards. It evaluates the expenses made using a card to make a particular purchase. Also, it recommends which cards are suitable for individual shopping habits. This app is popular for its seamless and smooth process and user experience.

This popular app is used to improve or maintain your sleep and meditation habits. At present, it has more than nine million users.

This Flutter app offers users access to a huge library of guided meditations, exercises, and sounds that support their lifestyle.

The developers took advantage of flutter components to create the perfect UI for the feature-rich application.

Toyota wants their customers to experience the same high level of performance in their infotainment systems as they get from the driving experience, so they switch to Flutter.

Thanks to Flutter’s ability to hot-reload the app on a desktop and deliver it to iOS and Android devices. It is extremely helpful for user testing, allowing Toyota to gather faster feedback for a better user experience.

A multi-purpose application for hotel guests was developed using Flutter that runs on Android and Apple devices. It enables you to book restaurant tables, check in the resort, browse nightlife events, and open rooms. In addition, it allows guests to gain reward points and get personalized recommendations so their stay at the hotel can be excellent.

Why Flutter is the First Choice for App Development?

Applications sharing the same codebase allow developers to introduce and update changes within a fraction of a second. Also, Flutter has an amazing UI that provides almost a native-like feel.

So if any project team wants to save time and resources on development and achieve similar results, Flutter could be the first choice.

This is why many leading brands, as mentioned above, use cross-platform technology like Flutter for app development.

To learn more, you can read our blog post, Why Enterprises Prefer to Build Remote Flutter Teams to Grow Business?

If you are unsure whether Flutter could be the best choice for your idea, we recommend contacting dedicated flutter developers and consultants at Your Team In India.

Yes, Google pay was built using cross-platform – Flutter. With the Flutter framework, Google Pay 3.0 will scale quickly and efficiently across the iOS and Android platforms.

Qn 2: Does Alibaba Build With Flutter?

Alibaba is China’s largest eCommerce platform built with Flutter. When it was critical for the Xianyu team to improve their user experience by developing an app that must be consistent across platforms, had stunning graphics, and still loaded fast, they shifted to Flutter.

At present, Flutter considers the third most popular app development framework. It is a high-level native UI platform that is open-source for iOS and Android devices. According to the developers’ community, Flutter is the future of app development as it s frequently setting the trend in the mobile development market.

Qn 4: Is Flutter Good for eCommerce?

Considering the above experiences of leading brands, we believe Flutter is a very powerful technology that has the ability to deliver potential applications for e-commerce. It has the essential tools and libraries to help you build your business all at once easily—for mobile, web, and desktop—and delivers more value to your customers.