How to Use ES6 Modules Effectively with NodeJS? 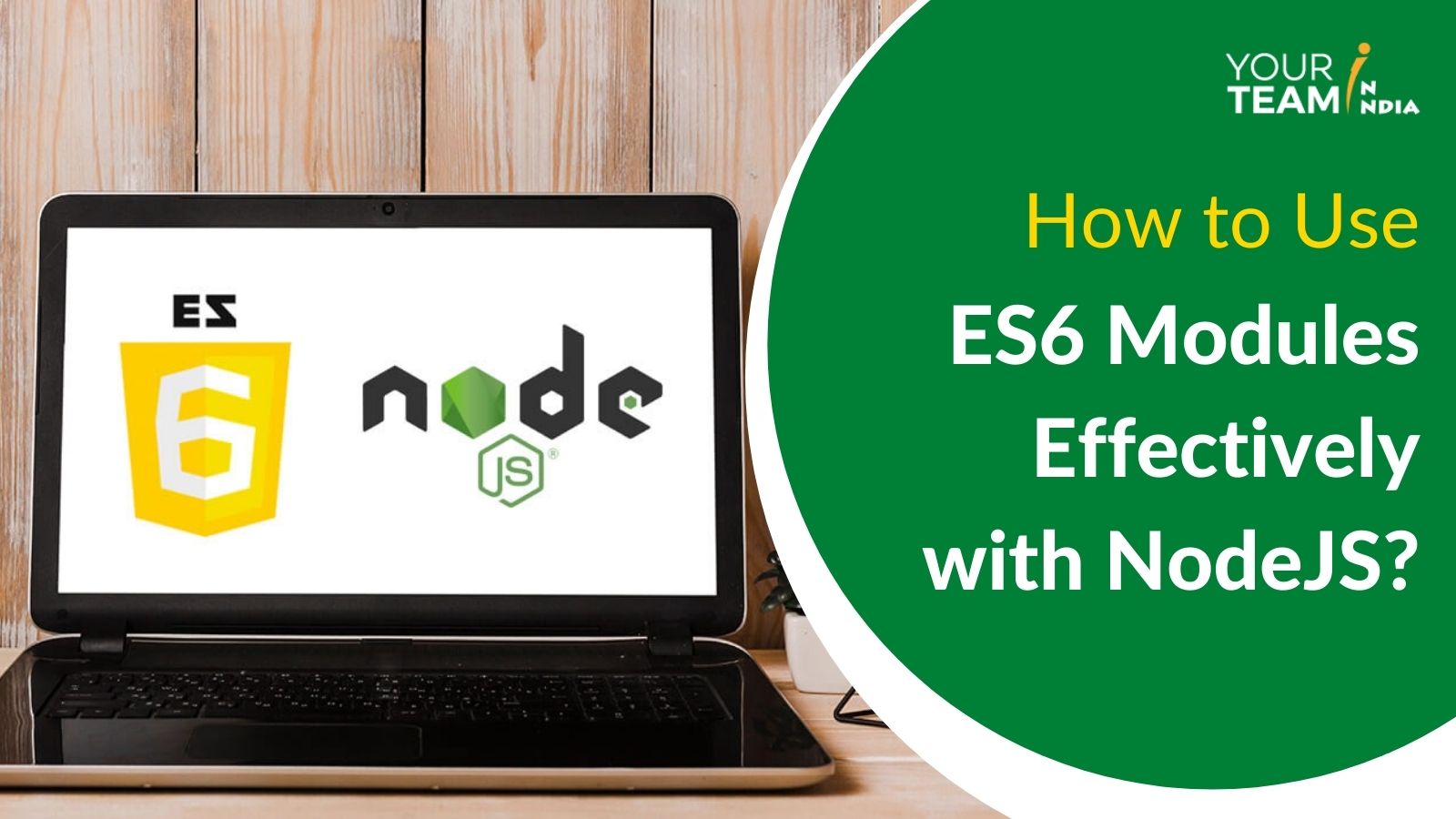 In this post, we’ll be discussing how you can use E26 modules with Node.js effectively. This article is helpful for all, especially the developers and the project managers who are planning to hire Node.js developer.

Since 2015, Node.js has been embracing JS ES6 along with the new changes added every year graciously. We even know about two prominent keywords- import and export – which have been introduced to handle working across the packages and the files. Both the terms are critical in Node.js. However, it is expected to become standard eventually.

A Little About ES6 Module: What it is and Why Should You Use It with Node.js?

An ES6 module is a file containing JS code, an automatically strict-mode code, even if you don’t write “use strict.” And, you can use import and export in modules.

Some prominent features of the ES6 module:

1. Arrow function
In ES6 module functions, you don’t have to use curly brackets or type the function keyword. Instead, they use a new token ‘=>.’
Syntax: (parameters)=>{Statements}

Arrow functions are majorly used in:

2. Object manipulation
Extract object values – for instance, if you have to extract values from ES5, you are expected to write at least 3-4 lines of code, but with ES6, it just needs a single line to do so. Hence, a nice and simple syntax to use in Node.js.

Merging Objects – You can easily merge the object using Object.assign(), which takes both the objects as inputs and outputs the merged objects that you wanted. In addition, the spread operator (…) turns merging objects into a hassle-free chore for the Nodejs development.

Define Object – So, if the name of the key and the variable assigned to that key is similar, it is easier for ES6 to identify which one is the key name and the variable. Don’t worry about doing anything there to make it understood.

3. Template Literal (`)
It provides an alternative syntax to define strings called Template Literals. This syntax utilizes backticks rather than regular quotes or double quotes as delimiters. The prominent advantage of this feature is that it can interpolate variables or expressions using ${expression} inside the string.

How is ES6 Module Enabled in Node.js?

You can do that by adding:
“Type”: “Module” to the package.json file.

Once enabled, you can use import and export for working with packages and files.

Import – The keyword ‘import’ works with objects and allows destructuring assignment when importing values. As a result, you can create smaller projects by just including specific values—the import keyword functions in connection with the export keyword.

Export – Export also works with objects, and when working with multiple objects, it creates exported objects created with inputs.

Node.js Doesn’t Support ES6 Module Directly: SO HOW TO USE IT?

Yes, Node.js doesn’t support the ES6 module directly, and even if we try to do so, it will throw out the error. So, for example, if you are trying to import the express module by writing (import express from ‘express’), the Node.js will probably show up an error like this:

Node.js comes with experimental support for ES modules, which you enable by making a few changes in the package.json file. For that, you will need to do this:

A) Open the package. json file and write “type”: “module” and this will enable the ES6 modules for you, looking something like this:

b) Now, create a file index.js, and using the ES6 import, write the program.
c) Run the index.js file as you type node-experimental-modules-index.js in the terminal.

Need Expert Help? You can Hire Developers as well!

(An alternative method you can use)

Using the esm module (world’s most advanced ECMAScript module loader to support ECMAScript modules in Node.js), you can do that:
Create file with .mjs extension (no need to add “type” : “module”)
Write the program directly using ES6 import and execute it, as you type
Node-experiential-modules index.mjs in the terminal.

(That was one way of doing it, below is another method to execute it)

Create another file server.js that can load esm before the application. Use this code:

What’s the difference up there in both the methods?
In server.js, we import the index.js file carrying the entire program with the purpose of execution.

Finally, type node server.js in the terminal for the execution of the program.

What if your Browser Doesn’t Support ES6?

Node.js Developers know that some browsers don’t support the features of ES6. In that case, you will have to use transpilation of codes, where you will be transforming the code in the language with a similar level of abstraction.

JS makes use of the Babel transpiler to convert ES6 code to ES5, but for that, you will have to install the following packages into your node module.
1. @babel/core: Contains the Node API and requires hook
2. @babel/preset-env: contains a set of plugins to convert ES6 features to equivalent ES5
3. @babel/register: uses Node require() hook system to compile files when they are loaded.
4. Babel-polyfill: includes a custom regenerator runtime and core-js, which imitates the full ES5 environment and is used in the application.

Once that is done, you can create a babel rc file with extension .babelrc in the root of your application directory. Then, you can set babel bypassing the package at babel present-env to perform the essential transpilation.

So, that’s that about how we can use the ES6 module with Node.js easily. If you like this article, help others read it too by sharing it with them. At your Team in India, we have a team of Node.js Experts. If you want to hire Developers or have any questions on what all services we offer at Your team in India– Click here to contact us.