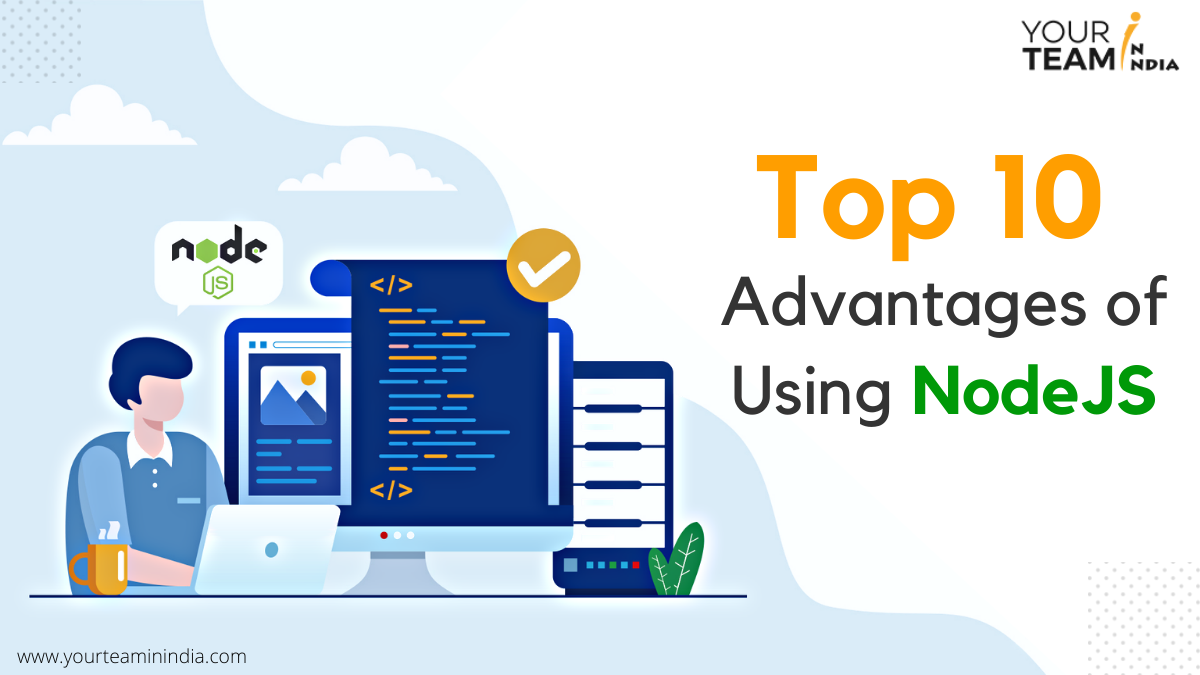 Node.js has also extended into backend development in recent years. Developers prefer to leverage the same tech stack for the full web project instead of learning a new server-side programming language. Node.js as a backend tool adjusts JS functionality and syntax.

Node.js: What does it mean?

Node.js is neither a library nor a language or a framework. It’s a runtime environment: JavaScript normally requires the use of a browser, but Node.js provides the necessary settings for JS to execute outside of the browser. It’s based on the JavaScript V8 engine, which may be used in Chrome, other browsers, or as a standalone application.

The goal of V8 is to convert JS browser-oriented code into machine code, allowing JS to become a general-purpose language that servers can understand. One of the boons of using Node.js in web app development is extending JavaScript’s capabilities by allowing developers to link the language with APIs, other languages, and other libraries.

Top 10 Advantages of Nodejs For Developers and Businesses

When developing a web application with Node.js developers may easily grow the application vertically and horizontally. Web developers can add additional nodes to the existing system while horizontally expanding the program. On the other side, programmers must add new resources to the current system to accomplish vertical scalability.

Because the technology is based on the event mechanism, it has a high level of scalability and aids the server in providing a non-blocking response. Node.js apps do not need a significant amount of core development time. Node. can work with a collection of microservices and modules that each have its js process. Because of this, it has far higher scalability than other JavaScript servers.

The Java code is interpreted by Node using Google’s V8 JavaScript engine. JavaScript code is compiled directly into machine code by the V8 engine. Thus, it aids programmers in the efficient implementation of programs. Because Node.js supports non-blocking run input-output activities, developers may benefit from quicker code execution and a better runtime environment.

Node.js is a highly expandable technology that can be tailored to meet a business or project’s changing and unique needs. For example, web developers may also transmit data between the client-server and web server using JSON and Node.js. In addition, TCP, HTTP, DNS, and other servers may also be developed using built-in APIs.

Developers may use Node.js to create frontend and backend web applications in JavaScript utilizing a runtime environment. It also gives programmers the ability to use JavaScript to develop code for server-side apps.

Other server-side programming languages aren’t required. As a result, because virtually all browsers support JavaScript, developers may launch their applications more easily.

The open-source runtime environment Node.js also has a caching module. The request for the first module is cached in the application memory whenever it is received. Thus, it aids developers by minimizing the number of tasks associated with the re-execution of code. In addition, the caching module loads web pages quickly and replies to visitors promptly.

The technology decreases the number of defects, reduces the size of the software, and increases the app’s time-to-market by reducing the development cycle by providing reusable templates. In addition, because Node.js is used on both the client and server sides, it is easier for developers to handle data while requiring less time.

7. Support From the Community

Node.js has a big and active community of software developers who constantly contribute to the technology’s advancement and enhancement. Web developers are highly assisted by JavaScript developers, who supply ready-to-use code on GitHub to construct sophisticated solutions.

Because non-block I/O systems are available, the technology can handle numerous requests at the same time. Compared to other languages like Ruby or Python, the system can handle multiple requests with the fastest response time and most efficiency. All incoming requests are organized and performed in a highly methodical manner.

JavaScript is a famous programming language used by web application developers to create the front-end. It’s simple for programmers to pick up Node.js and use it for backend development. As a result, it enables people to develop code in a shorter amount of time.

Node.js boosts app response time, development time, and productivity, giving businesses a leg up on the competition. The system achieves next-level efficiency and flexibility by controlling the rising volume of mobile traffic, preventing the server from crashing, and dispersing the load. In addition, by incorporating required functionalities, Node.js developers may create responsive webpages faster.

Node.js is an excellent tool for creating scalable, high-performance online applications. Despite the fact that it, like any other technology, has both good and bad elements, you should think about using Node.js for your next software development project. Unless your app requires a lot of processing power, the advantages of Node.js outweigh the disadvantages.

Your Team In India is accessible if you are unsure about the backend technology for your next project and still have concerns regarding the benefits and drawbacks of Node.js. Our dedicated developers select the most appropriate JS modules and frameworks for a certain web app concept. Contact us if you’d like to create a web app or convert an existing one to Node.js, or if you have any questions about our Node.js web application development services. We’ll get back to you as soon as possible with case studies and practical advice.