Java vs .NET: Who Will Rule the Future?

The choice of language plays a crucial role when it comes to developing an app or a website.

Many times apps end up failing and people end up losing their hard-earned money just because the language chosen for the app development was not right. Hence, choosing an appropriate programming language is crucial.

However, picking a suitable one from two languages is easier said than done. There are a lot of factors we have to keep in mind. Consider Java and .NET for example.

Both are famous technologies using which we can create large-scale enterprise applications (Software, websites, and web applications).

Both languages have their own benefits and own set of applications. Now, how would you choose which one is better?

Well, the main difference between Java vs .NET is that Java can run on multiple operating systems via its compilers and JRE (Java Runtime Environment). In contrast, NET runs only on the Windows operating system and its different versions.

Here, we will compare both the languages in detail so that you can choose which language is more suitable for your business. Let’s have a brief look:

Core differences between Java and .NET: At a Glance 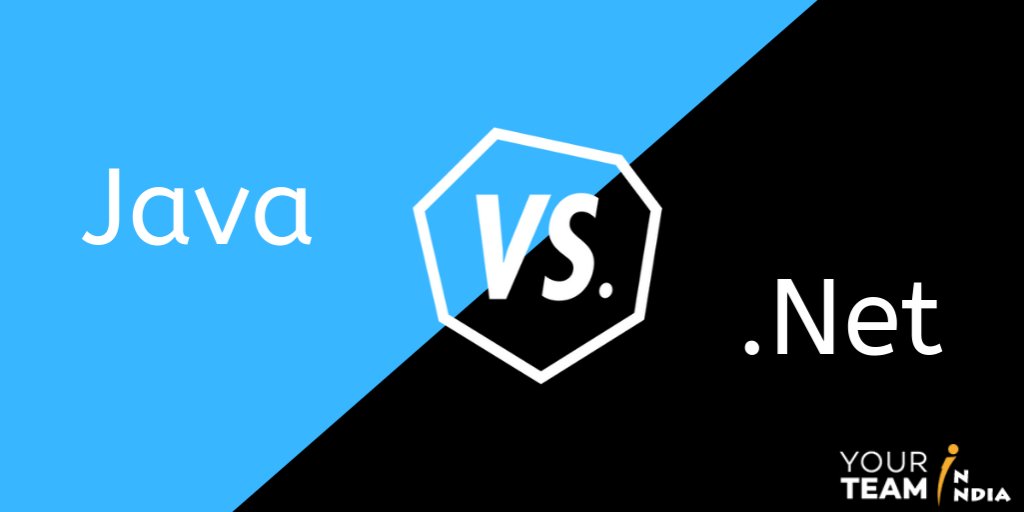 However, the J2EE framework sets Java as a default language, while .NET is compatible with other languages such as C#, F#, and VB.net. This is a more flexible approach to the development of business apps, although it requires more varied coding skills.

Although, in many areas, the Java vs .NET performance is identical.

Java vs ASP.NET: Who’s Dominating Who?

Java has been the hot favorite of developers for creating web applications. There was a notion that the future of web application development lies with Java.

Due to this reason, developers were busy getting their hold on Java.

However, things changed after the arrival of ASP.NET. Because of its robustness and the competitive edge it provides, ASP.NET is being extensively used for developing web applications. Here are some interesting stats:

Here are some other stats:

So, the results in Java vs ASP.NET are clear. ASP.NET dominates the market and is preferred more as compared to Java.

Why is ASP.NET so popular?

The main reason for the popularity of ASP.NET is that it allows developers to program in different languages.

You are not stuck with just one language. Instead, you can take the best from each language and develop your own dynamic web pages.

Flexible is why developers and enterprises around the globe love ASP.NET so much.

Back in 2018, the job recruitment platform indeed.com had analyzed the postings in the software development category to see which languages were most in demand.

According to the report, Java clearly dominates the market with 30% job postings while C# was on the 5th rank with 15% job postings.

So, according to .NET Vs Java Comparison, there is still more demand for Java developers as compared to the ones specializing in .NET development.

Java vs .NET: Which One You Should Choose?

Choosing between both technologies is not easy. Even if you are aware of the advantages and disadvantages of both languages, there are still chances that you might end up overlooking a thing or two.

That’s why it’s important to keep some simple and crucial factors in mind, which are as follows:

Factor 1: Do you have enough resources?

This is a simple yet critical factor that may turn into a big issue later on.

So, you will have to see if you have enough .NET developers or Java developers in the company from where you are outsourcing your team, and then choose whether you want to develop the app in Java or .NET.

Factor 2: Can your infrastructure support a complex app or website?

If yes, go for .NET development. Creating complex enterprise applications is easy in .NET since you can pick the best from every language.

Otherwise, it will be better if you go for the more flexible approach that Java-based solutions offer.

Factor 3: Do you have enough time and budget?

Yes, budget is an important concern here. You have to keep it in mind.

Now, if you rely mostly on Windows-based software to run your business and you are a loyal Microsoft user, it would be better if you stick to .NET as the .NET-powered solution will result in minimum expenditure.

Creating an enterprise application in Java, on the other hand, will be costly. In case you want to reduce costs, you will have to carefully access the supporting software and choose the right mix of Java tools.

Factor 4: Do you want to create an app that handles large amounts of data or an app with a rich graphic user interface (GUI)?

Building sophisticated apps that deal with a large number of users and handles an ample amount of data is easy with Java. On the other hand, .NET is more suitable for apps that have a rich graphic user interface (GUI).

Factor 5: Do you need an app open-source compatibility?

If yes, Java is your language of choice. In fact this is the reason why most companies are still looking forward to implementing Java even in advanced fields like artificial intelligence and machine learning.

Note: Microsoft is looking forward to closing this open-source compatibility gap in its .NET framework by integrating open-source tools and platforms. But this is still time for that. So, it would be better if you opt for Java.

There is no good or better, or right or wrong choice in Java vs .NET. Both technologies have their positive and negative aspects. Both can help you create feature-rich and dynamic enterprise apps.

Choosing between Java vs dot net depends upon your requirements, available development resources and skills, and the end-user needs.

Also, regarding the question of who among Java vs .NET will rule in the future, the answer is:

To grow and thrive in the competitive market, you will need both languages. Each has its own benefit. Businesses can take advantage of the positive aspects of each – and develop high-performing websites and applications.

And to take advantage of both the services, you will need an outsourcing partner that understands your requirements as well as the market trends, and then develop your website/application using the latest development capabilities.

You need someone who can mentor you and offer much-needed tech support.

We can provide you the services you are looking for, and help you solve this riddle of choosing between Java vs dot net.

So, let’s get in touch and see how we can help you in realizing your dreams.