Java vs Kotlin – The Best Language for Android App Development?

In the mobile app technologies world, Java vs Kotlin is one of the most popular search terms. If you too are looking for the comparison of Java vs Kotlin frameworks, this blog is for you!

But first, let’s begin with a small introduction to both these programming languages.

Java is a well-known language that came into existence 24 years ago (established in 1995 by James Gosling). It has a supreme position in the list of the most popular programming languages.

In fact, Java holds the highest usability record with a huge number of developers and systems. And most of the entrepreneurs prefer to hire Java developers to build tailored solutions for their business.

Google is still utilizing Java for building Android mobile applications. Moreover, it is a primary driver of eCommerce engines including eBay and Amazon.

In addition to this, Java is a major contributor to the open-source community i.e. a wealth of resources and a lot of fun tools.

Despite the undisputed reputation that Java holds, there was a need for a modern programming language. Kotlin fills this gap. Especially when Kotlin was declared as the official language for Android apps.

Kotlin has actually turned the tables especially since Google has officially announced Kotlin as the best language for Android app development at Google IO on 7 May 2019.

Definition of the Programming Languages?

How Java Works: Java works on the principle of ‘Write Once & Run Everywhere’, which is platform-independent. The general-purpose computer programming language is concurrent, class-based and object-oriented. The platform includes the execution of an engine, compiler and a set of libraries. As a matter of fact, the language derives most of the syntax from C & C++.

How Kotlin Works: Kotlin is an open-source platform, based on JVM and can be compiled to JavaScript, Android, and Native and run on iOS. Fully compatible with Java stacks, it is a combination of object-oriented and functional programming features. This concise, safe & pragmatic language focusses on interoperability with Java code and can be used everywhere Java is used.

Origin of the Programming Languages

Java: Java was developed by James Gosling and his colleagues at Sun Microsystems in 1995. Java is intended to be compiled to bytecode which is then run by JVM.

Kotlin: Kotlin was introduced by JetBrains in 2011 that is the originator of IntelliJ IDEA, PyCharm, and different top IDEs. The language has got its name from the ‘Kotlin Island’ in St.Petersburg, Russia.

Java: Java is still the most popular programming language according to the TIOBE Index and is the second most searched language in PYPL (Popularity of Programming Language).

Kotlin: More than 50% of the professional Android developers now use Kotlin to develop the apps. And in the latest Stack Overflow developer survey, it ranks as the fourth-most loved programming language.

Kotlin: Like Java, Bytecode is the compiled format for Kotlin. The programming code which is once compiled and then run via a virtual machine instead of a processor is called a ‘bytecode’. This approach helps to run the code on any platform.

Despite the differences, both are 100% interoperable. You can call Kotlin code from Java and vice versa. So, it is possible to have Kotlin and Java classes side by side within the same project.

This flexibility helps the developers to swiftly switch between the two languages. For example, there are features you want to write in Kotlin and other you find easier to write in Java. As both compile to bytecode, the end-user will be unable to tell where Java code ends and Kotlin begins. 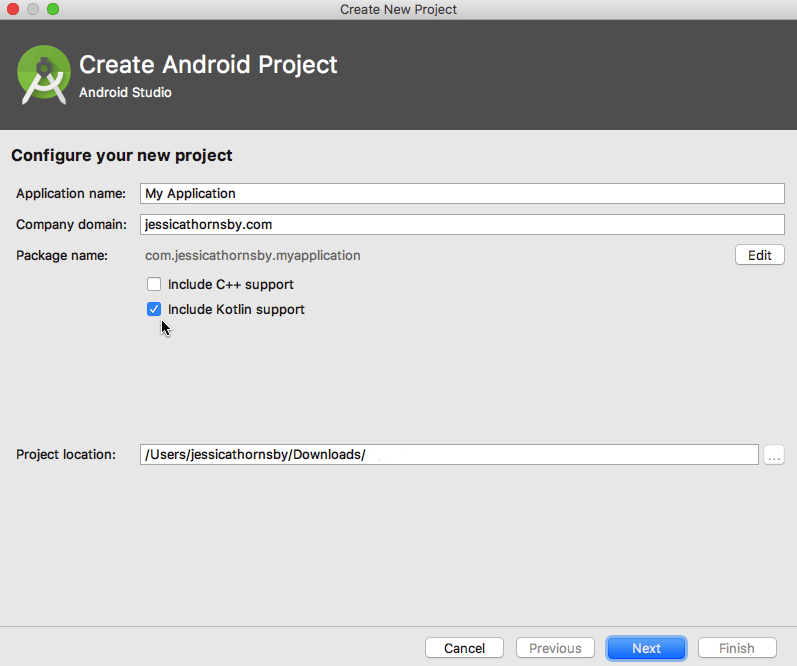 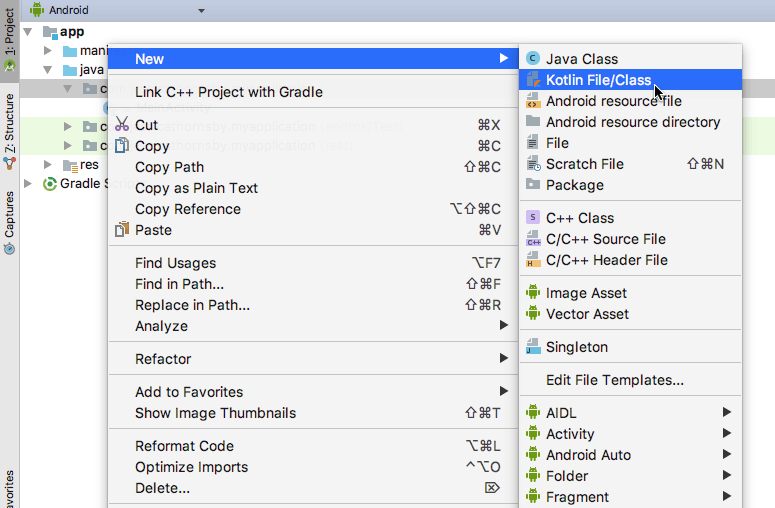 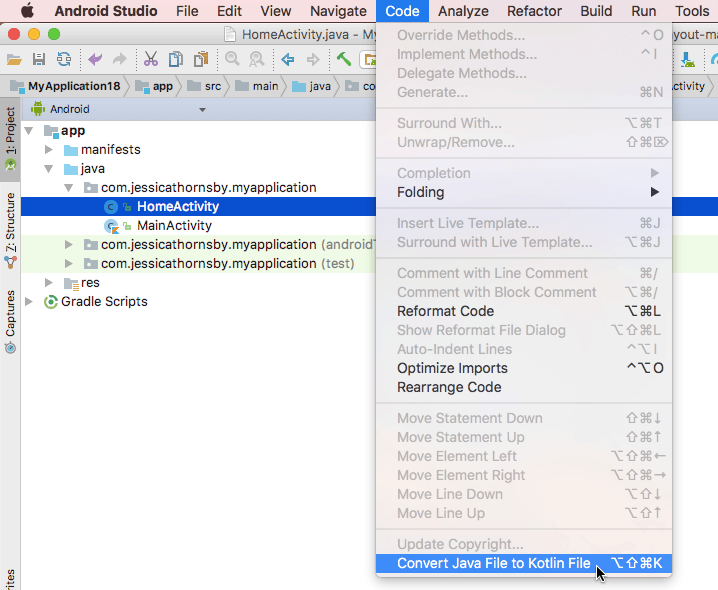 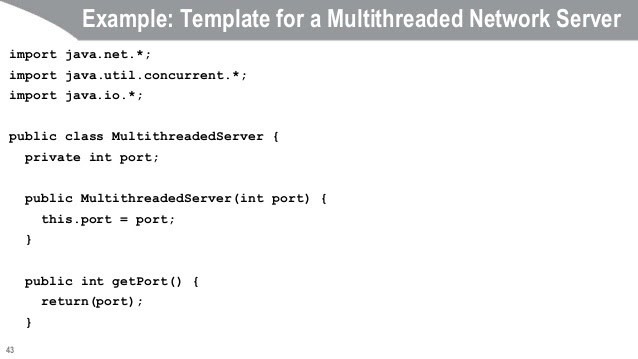 IDE Support in Java vs Kotlin

Although there are innumerable websites that give detailed insights about both the languages but the popular ones are:

Big brands are already using these top two programming languages. Here are a few examples of the applications that are extremely popular: 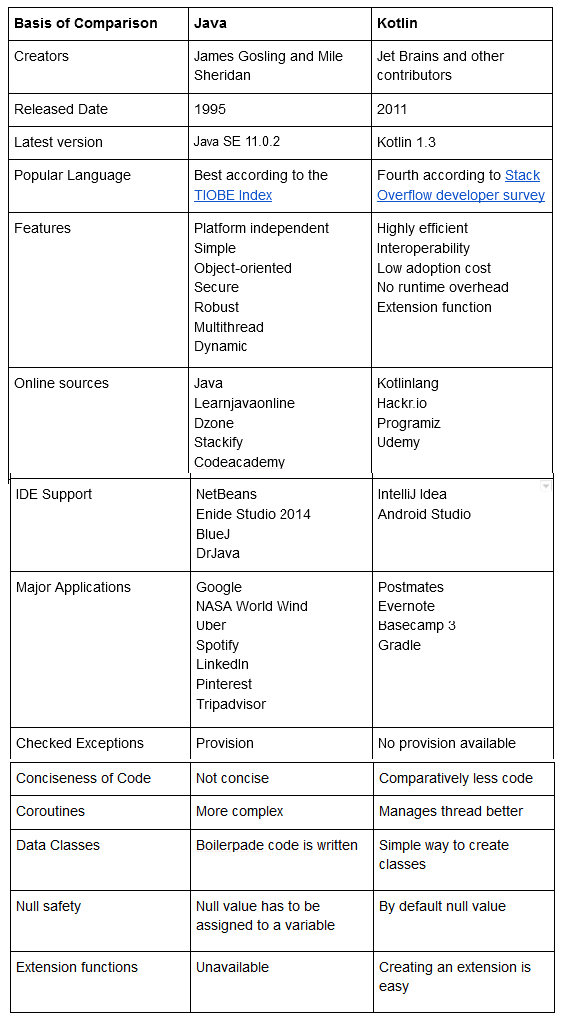 Java vs Kotlin: Which one to Choose for Android App development?

As a personal opinion, Java is surviving for a very long time. Kotlin is basically a pragmatic enhancement of Java. Both the programming languages resemble each other in the various instance and offers great support for mobile app development.

Whether you hire mobile app developers for Java or Kotlin, your application will perform optimally. Where Kotlin has just made a fresh start, Java is like a best friend of enterprises, that has stood long and passed every test.

But as Google said, Kotlin is the future of Android mobile applications. It is a reliable, flexible and secure language for both startup and enterprises. Not only it reduces errors but also crashes at run-time making debugging reliable.

Furthermore, being budget-friendly and enhanced efficiency, it’s best for the companies to hire android app developers having hands-on expertise with Kotlin.