Why Flutter is Ideal for MVP Development? 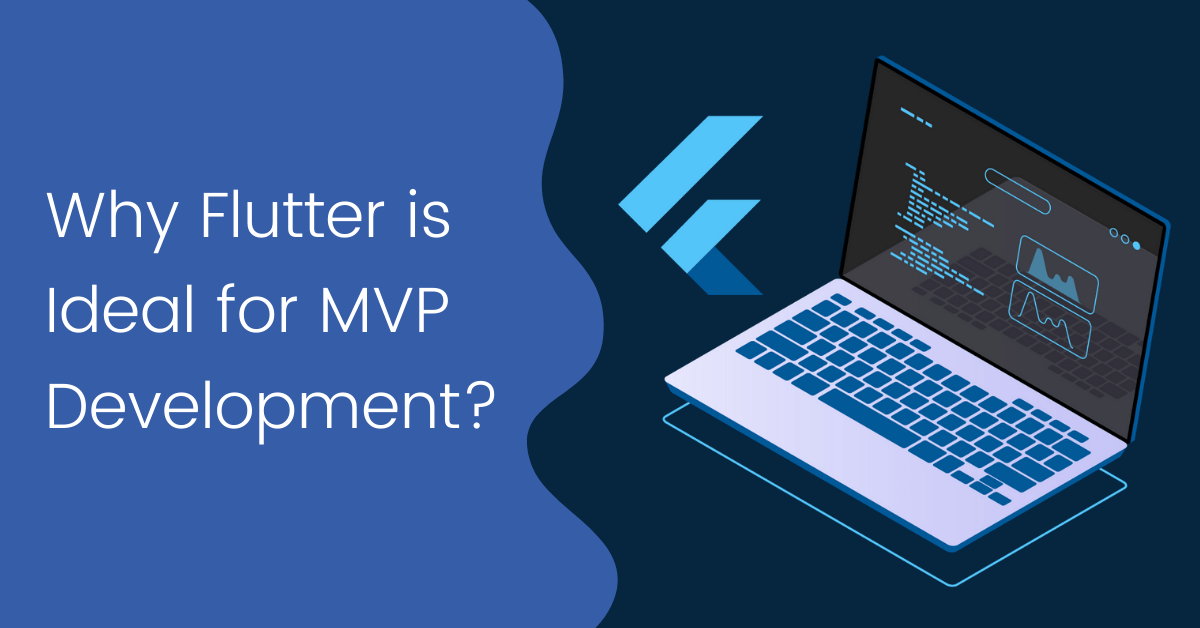 Having a great idea is just the first step in the creation of a successful mobile app. Afterward, checking its validity in the real world is the key to getting started. And building an MVP or Minimum Viable Product can help you test your idea, accelerate time to market & keep the development cost under budget.

If you have reached here, you might be already aware of all the benefits of building an MVP. But for those who are new to this world, it’s important to first understand the importance of getting started with an MVP instead of the full-fledged product.

As mentioned above, MVP development is all about validating the idea, as it confirms the interest of users in your product. The main purpose is to test the hypothesis by reducing errors.

In other words, building a minimum viable product can help you bridge the gap between “what the business is offering to customers and what they actually need.” Moreover, you can significantly reduce the overall cost of development.

How? Well, to build a mobile app you need a team of full-time dedicated developers. Whereas, if you want to build an MVP then hiring developers on a temporary basis would also work. Here, temporary developers mean hiring freelancers or remote developers from an agency.

Now, with the reduced overhead cost, you can build your mobile app with basic features & launch the prototype while saving cost, efforts & time in the hiring process of full-time employees.

For better clarity, let’s list down all the benefits of building an MVP (Minimum Viable Product);

Like mentioned earlier, checking the validity of your idea is the prime purpose. Of course, you would not like to invest in an idea that might lead you towards failure. Moreover, while testing the idea you can collect feedback from the early users, make adjustments, and consider new features to satisfy the end-users.

This is one of the best advantages. By opting to build an MVP, you can reduce the time to market and launch your mobile app with basic features. The average time-span for building an MVP would be about one or two months, getting you ahead of your competitors, that will launch their full-fledged app after six months.

Are you a startup? If yes, building an MVP becomes even more relevant for you. Because your app is going to take fewer hours to launch, you will pay a lesser amount to the developers. Thus, you can test the waters without spending thousands of dollars.

Considering that you are seeking investment for your idea, you may need to present a working prototype. That’s where MVP development becomes handy. Just take a quick look at the above benefits, and you will agree that presenting a prototype to investors is easier.

Getting Started with an MVP

It is always recommended to start with the basic and limited features, especially for startups. But before that, you should conduct market research to find out the features that are must and would be required to fulfill the requirements of the end-users.

Additionally, it will give you an opportunity to start the promotion of your app earlier. As a result, you can easily reach out to your target audience. And as soon as you will get a clear picture of the users’ preferences, you can improvise the end product accordingly.

Besides this, a tangible outcome can help you gain the attention of potential investors.

The mobile app development industry is going through a technological transformation. For building a prototype, experts always recommend choosing a cross-platform framework. Top contenders on the list are React Native, Flutter, and Xamarin.

But most entrepreneurs choose between React Native and Flutter. Of course, both of them are the best, but in terms of design and flexibility, Flutter wins the competition.

For more insights, you can check out this React Native vs Flutter comparison.

With plenty of mobile app frameworks trending in the market, it is quintessential to select the one that best fits the company’s objectives. Flutter is one such platform that is worth investing in and promises to deliver superior-quality apps for both iOS and Android.

Flutter is creating headlines within the mobile app development industry. The top-notch quality and effectiveness are evident by the stable release of Flutter 1.2.2. Furthermore, adoption by big giants like Alibaba, Google Ads, Birch Finance, App Tree, etc, adds up more support for the use of this framework.

What Makes Flutter an Ideal Choice for MVP Development?

Flutter is basically an open-source software development kit that is in the market since 2015. And, it remained in the beta stage before the official launch in December 2018. But has now evolved as a mature framework and best choice for the development of hybrid mobile apps.

Over time, Flutter has become popular for enhanced features, bug fixes, and widgets. Being open-source, it complements MVP development whether it is for startups or established firms. As you are fully aware of Flutter, let’s discuss the benefits of using Flutter for Building MVP;

1. Development of a Cost-Efficient Mobile App

From the very beginning, cost limitations have been the major hindrances for businesses that wish to enter into the mobility space. While developing native apps, you may end up spending more on hiring two teams of mobile app developers (iOS and Android).

Flutter can facilitate the development of a budget-friendly MVP in different ways.

Flutter comes as a solution, supporting the development of mobile apps compatible with iOS and Android with a single code base. Also, the availability of widgets makes it easy for flutter app developers to seamlessly work on the UI aspect of the application.

Besides this, Flutter gives you the opportunity to make valuable integrations. Developers can export the sketch design directly into the pixel-perfect codes. Despite making changes in the visuals, developers can prioritize delivering the value.

Flutter carries what Google is popular for; the expressive and flexible UIs to elevate the customer’s experience. For e.g, Flutter owns the built-in widgets for the material design, Cupertino and default animations for normal scrolling, rich motion APIs, etc.

Indeed, if you have a large budget to spend on mobile apps, you can go ahead and hire android app developers and iPhone app developers, to build native applications.

But if you are on a budget and want to develop hybrid apps, most of the frameworks will compromise with the performance, thereby undermining the app’s user experience.

Whereas apps built with Flutter are known for their performance. The apps run via natively compiled code without the interference by interpreters, therefore, start quickly to maintain a constant 60fps speed. In short, if you plan to develop the MVP of your application using Flutter, it will have the ability to provide native experience to the users.

App development using Flutter provides a quick turnaround time. This is because the SDK comes packed with the hot reload functionality making it possible for the developers to review the app changes in real-time. This makes the complete app development process fast and easy.

There is no need to have a separate backend for developing a simple MVP. Firebase offers out-of-box support for plenty of services like cloud storage, cloud functions, real-time databases, hosting, authentication, etc.

Basically, the Firebase Remote Config assists you in making changes in the app without long waits for the play store to deploy the same.

The support becomes serverless, redundant, and scalable. This simply means that there is no need to spend a lot of time and resources on the development of the backend. It can be directly combined with a tool for automating the development and release process like Fastlane, facilitating continuous delivery.

When you hire flutter developers, they can choose a number of Integrated Development Environment supported by this software development kit. Plus, Flutter Live uses Visual Code, which is light-weighted and much faster, having many features available in the Android Studio and IntelliJ, thus, eliminating the need to start over.

React is basically a JavaScript library. Whereas Flutter has a modern framework inspired by React, thus, allowing developers to use the complete framework or parts as per the requirement.

After the app launch, marketing is the first concern for most entrepreneurs. Well, Flutter has found a solution to this problem as well. It allows you to promote the app on different platforms inclusive of Google Play, Google Search, Gmail, YouTube, and continuously growing on the Google Display Network.

Moreover, it offers $75 credit on the spend of $25 on different campaigns.

Flutter gives a dynamic app development setup. It comprises a dedicated widget engine and UI components resembling the native platforms. The widgets are also flexible when it comes to customization and are aesthetically designed.

10. Flutter has an Active Community

The super-active Flutter community is always active for the contributors. The community has several platforms inclusive of Github for raising tickets, Meetup for the next event, or getting involved in Q/A conversations in Stack Overflow, Medium, Slack, YouTube, and different platforms.

Top Companies that Build MVP before Getting Popular

Undoubtedly, developing an MVP before launching the actual product has a long list of benefits. And there are many companies that gained overnight success by using MVP’s first approach. Here are a few companies that released MVP’s to achieve massive growth:

Dropbox, the most popular cloud-based storage platform, had to face financial challenges in its initial stages. They didn’t even release the physical product, rather created a short video that demoed their product’s first build.

Because the concept was unique and innovative, it turned out to be an overnight success. After the immediate release of the video, their beta sign-up list went from 5,000 to 75,000.

The biggest photo and video sharing social media app, “Instagram” was launched when the market for editing software for images was saturated. Developing an MVP initially, making it a huge success.

In the beginning, when it was a simple photo-sharing platform having basic filters, it was only compatible with iOS. In a saturated market, the MVP worked wonders for the makers.

Airbnb has its own significance in the tourism industry. It started offering accommodations at a reasonable price to the travelers and tourists around the locality of their journey. The MVP had different images of the apartments and flats. With Flutter MVP, the main motive was to obtain feedback from the customers and then work on the end product accordingly.

Building exceptional and high-performance mobile apps require a decent amount of support from SDKs like Flutter. Well, Flutter has the ability to make a lot of difference as it can simplify the complete process of mobile app development without compromising the appeal and quality of the app.

It provides native app performance, making it more lucrative to the initial adopters and investors. Also, it beautifully fits into the particular needs of the Flutter app developers. However, there has been no skepticism regarding the Flutter’s efficacy on the outstanding interface, flexible APIs as well as excellent performance.

So, what is keeping you from picking up this platform for your MVP development? Drop your requirements at [email protected] and harness the lucrative power of Flutter to create an extraordinary Minimum Viable Solution as the end product.

Ready to take off with your app idea? Hire developers from Your Team in India and start working on your dream project.