Angular vs. React: Which Framework Is Best for Your Next Project? 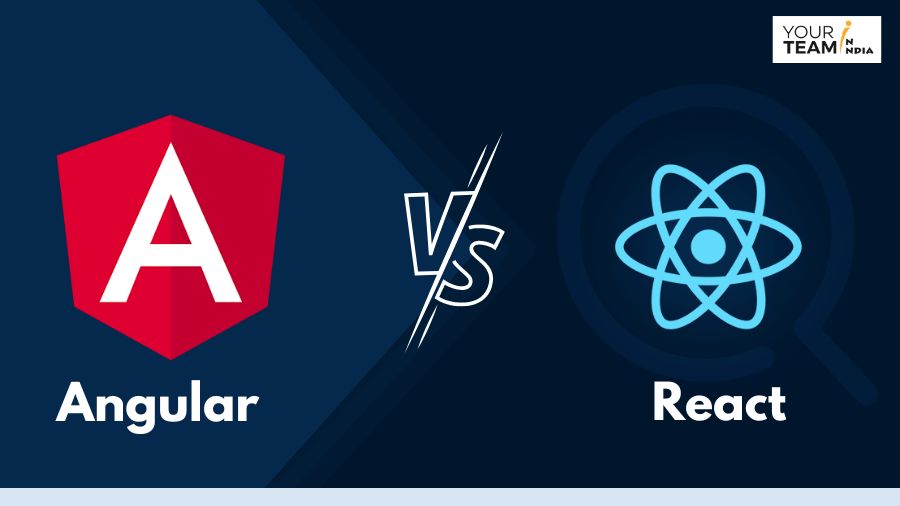 JavaScript frameworks are popular among web developers because they make developing websites fast and easy. In the development marketplace, Angular and React are two of the most versatile frameworks. They provide flexible front-end development applications for use.

Angular and React are front-end frameworks that allow users to develop intuitive user interfaces using HTML, CSS, and JavaScript. However, Angular vs React has some important differences that should be considered when deciding which framework is best for your next project.

A Brief Introduction to Angular and React

React is a front-end development framework for building user interfaces maintained by Facebook. React is a library for creating user interfaces. It helps you build reusable elements, making your code easy to read and maintain. Its goal is to make writing UI code easier and more intuitive.

As a result, the application’s view only needs to get updated when there is a change. It makes applications more efficient and flexible than traditional applications created using web frameworks.

Angular vs React – The Similarities

Both Angular and React are popular front-end development frameworks when you are looking to hire an Angular developer. They have several common features that may be useful to developers. Here are some of them –

However, some important differences between Angular and React that should be considered; when deciding which one to use. Here’s what these differences are –

React uses a virtual DOM approach that changes how the browser renders a web page in a high-performance manner. But this framework does not offer a complete solution regarding SEO and flexibility because it does not add scripts to the document.

Angular is built on two-way data binding, meaning that if you have a large list of items that need to be rendered on the page, the framework will have to go through and update all the bindings for every item in the list.

Angular was designed to be a full-featured framework, while React takes a more minimalistic approach. As a result, any changes made to the model will be automatically reflected in the view and vice versa. While this can be convenient, it can also lead to performance problems if not used correctly.

Angular is a complete framework that includes everything you need to develop web applications. It is perfect for large-scale projects due to its robustness and features.

React is a library rather than a complete framework, meaning you need to use other libraries or frameworks with it to build web applications.

Angular applications can be larger than React applications because Angular provides more out-of-the-box functionality. But it can also make the applications more complex and difficult to build.

React is a more lightweight framework than Angular, better suited for smaller applications, and does not provide as much functionality as Angular. However, this simplicity makes React easier to learn and use.

Angular and React are two popular frameworks supporting JavaScript. However, Angular’s Popularity has declined recently as hire developers are in demand. It encompasses approximately 22%, while the Popularity of React has increased and reached 40% of the total Popularity in the development market. Both frameworks are used for front-end development, but they have different purposes.

Because of its virtual DOM architecture, React is faster than Angular. Also, the comparative size of the project developed in Angular is marginally higher.

In React, updating virtual DOM is faster than the standard DOM. And the virtual DOM act as a filter between the real DOM modifications to identify the real components. It then updates only those components that have been already modified rather than updating the complete DOM, which saves more time.

Although all web developers are well versed with JavaScript Framework, you must estimate the overall time it takes for a developer to learn new features that are introduced with the library or framework.

Because of its NG directive and typescript, the angular framework is considered to have a steep learning curve. With the introduction of TypeScript, the framework is rigid and thus very difficult to adapt to nuances. While it is tough to cover all the features and other options available, you must research the requirements demands.

React JS library has frequent updates that have to be adopted by the developers so that the developers can consider React as an easy-to-learn platform.

Benefits of Angular vs React Frameworks

Angular Vs. React – Which One Should You Pick?

React and Angular are both powerful options for web development. However, they have their strengths and weaknesses, so you need to decide which one is better suited for your specific needs. However, React is better for small projects, while Angular is better for larger projects. If you are starting a new project, React is the best option. If you are upgrading an existing project, Angular is the best option.

How is React different from Angular?

Is Angular better than React?

What is the difference between JavaScript and TypeScript?

JavaScript is a popular programming language for web applications; however, TypeScript is an OOP language that is based on JavaScript.

Is Angular easier than React?

React, compared to Angular, is easy to use and provides developers with different options for performing simple tasks.