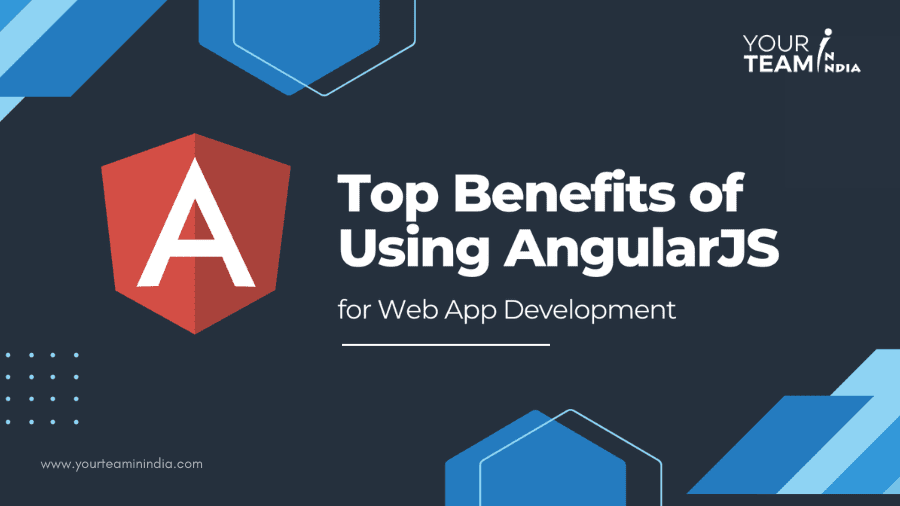 Summary: One of the continuous advancements in web technology has been the addition of Javascript frameworks. Angular JS is one such popular framework used to build dynamic web apps. Leading market players, especially Angular by Google, support this frontend framework. However, before choosing any Framework, including Angular JS, it is critical to understand how it can benefit your project.

Angular JS is a popular framework maintained by Google to simplify development & testing processes amongst developers around the world. Angular apps enable quick load by incorporating a new Component Router, which provides automatic code-splitting, so users only load the code required to generate the view they request. Some popular websites and applications that use AngularJS are Amazon, Paypal, Netflix, and Gmail.

It’s critical to understand the advantages of AngularJS framework for app development. It will help you evaluate if the developers have the requisite expertise to manage your project, which will eventually help you find the best angularjs developers for your web app development.

The language has earned credibility due to Google’s support. Further, AngularJS’s benefit is the large developers’ community that enables you to ask other developers for suggestions.

Several applications contain over 60 components and are still easy to manage despite new developers joining the project. It gives an idea of the application & its functionality & it becomes easy to locate the codes for the angular js developers in an easy manner too. So, it’s improved & enhances the design structure in the market.

With a declarative user interface, it becomes easier to make the process simple, more understandable, and easy to update. In addition, HTML allows developers and designers to work together. While developers can employ declarative binding syntax to integrate several UI components with data models, the designers can solely focus on building UI.

Developers can now re-use the codes or the codes component written before in multiple applications, thus making Angular JS development a unique framework.

AngularJS offers an immediate synchronization between the view and the model. If any data is modified in the model, it is highlighted in the view. The model has been revised accordingly when modifications are made to the view data.

The application will greatly facilitate its presentation layer using this two-way data binding. This allows an easier, less intrusive approach to DOM display to develop the UI.

If you want to add your existing components to a new application, you can do that by just copying & paste the same into a new one. Furthermore, all assets can be available automatically. It truly plugs & plays in Angular JS development.

The MVC architecture ensures that the application development, testing & maintenance is fast & quick! It helps in enhancing the productivity of the developers too.

Further, testing features display how to resolve their dependencies. This makes it more manageable for developers to test their applications and identify errors.

Directives make it possible for developers to experiment with HTML & attributes freely. Also, provide them complete independence to create their web development process a responsive & dynamic one. You can test, construct & inject or do just anything!

Whether illusioned or disillusioned, you can manage the application state with ease. In addition, it helps you organize properties, permissions, and other significant considerations across your application seamlessly.

AngularJS framework is rich in features. Developers do not need to rely on any third-party software to support their applications. AngularJS framework saves developers a lot of resources and time while working on web development projects. With this framework, developers can develop top-notch and dynamic web apps.

So, if you need an experienced Angular JS developer, you can contact our experts for consultation and app development services.

Q: What are the most important features of AngularJS?

The most critical features of AngularJS include Dependency injection, Architecture, Directives, and Data binding.

Q: Is AngularJS frontend or backend?

AngularJs is an open-source JavaScript frontend framework for developing single-page web applications(SPAs). It is a continuously evolving and expanding framework that delivers more promising ways to develop web applications.

Q: Does Netflix use AngularJS?

Q: What apps are written in Angular?

Angular offers the advantage of dependency injection that enables you to improve the code readability and make it easier to maintain. This is a very useful factor for developing a large-scale enterprise application.