What makes Python a good choice for machine learning?
Skip to content

Python is one such programming language which is extremely popular around the world. It was developed by renowned developer Guido van Rossum. It is a high-level programming language which has numerous perks over others. It makes use of object-oriented paradigms, classes, and objects, with a pre-included standard library to make it easier for developers to design robust and versatile solutions for their customers.

The need for programming languages

A world without programming languages is hard to imagine. It is these languages that are the reason behind all excellent software, smoother functioning apps, and rapidly evolving technology. Programming languages have widely required in the modern era. They come with a multitude of features that help in designing and solving problems.

They assist in developing real-world algorithms which are incorporated in business companies and other sectors. They also have essential elements which are necessary for the functioning of a smart device. Programming languages also help in easily defining complex structures. They help in storing data, handling information, arranging and viewing multiple works too.

• Python is a multi-programming language

• It supports all kinds of platforms

• It is widely extensible, unlike other languages which are very limited.

• Its extensions also support logic programming and design by contract.

• It free and open source software that is available anywhere.

• The language is very expressive hence it focuses even on the presentation aspects too.

• The language has a vast standard library.

A wide range of benefits of Python makes the language better than others. Some key perks of the languages are as follows.

• Extensive support libraries are also another perk of the programming language. It has several header files, string operations, and mathematical files incorporate in its libraries which makes programming tasks speedy, comfortable, and short.

• Other languages may require training and expert guidance. However, Python eliminates this requirement. The language is straightforward to learn and code. The code is also relatively shorter compared to other languages. The syntax and semantics of the languages are simple as well. So, it is an ideal beginner’s language too.

• Python has an object-oriented design which makes it suitable for real-world scenarios which focus on logical situations. The language is capable of developing codes that have data abstraction, data encapsulation, polymorphism, data binding, security and much. The approach of the language is also different from other languages which makes it renowned for building complex applications.

• The language also has spectacular features which make it interactive, dynamic, modular, portable, and extensible in C++.

All these features make Python extremely popular. According to GitHub Octoverse, it is ranked the second most popular language after JavaScript. 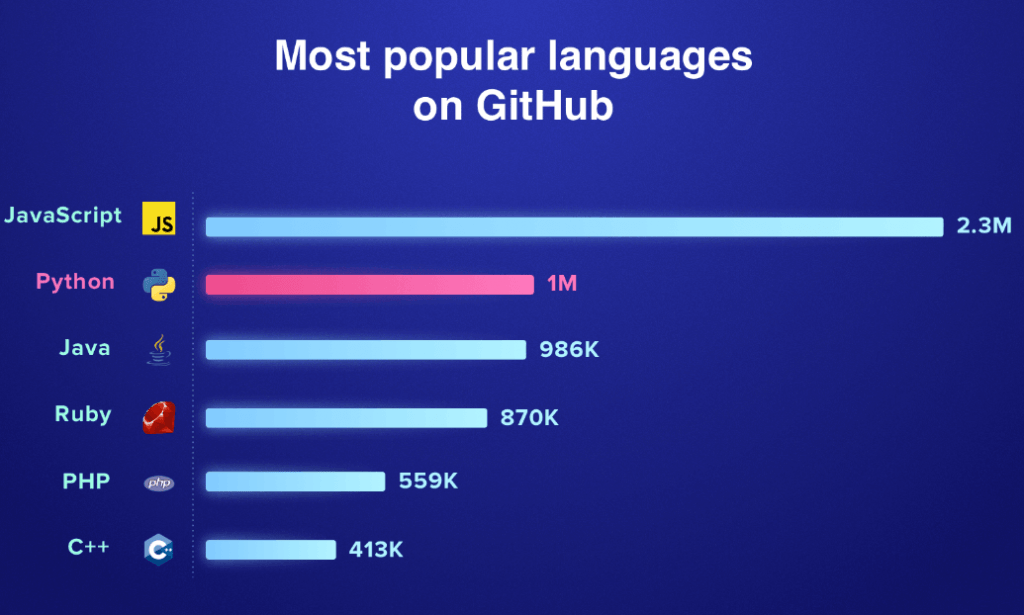 Since Python has various characteristic features, it is famous around the world in multiple sectors. The primary applications of Python in the real-world scenario are as follows.

• The language comes handy in developing frameworks which could be micro or advanced. Hence, it is hugely popular in web development.

• It is also applicable in scientific computing which includes data analysis, handling libraries, visualizations, and much more.

• Python is also used in numeric computing too. In digital computing, the language handles parallel computing, boot camps, and other materials.

• In various schools, high school children are taught Python before teaching other languages as it is easier to learn. The language can also be pursued in higher studies as well in the future.

• Most of the graphic user interfaces are built or designed based on Python. Development of other software’s is also possible through this language.

• The languages also have a significant application in developing ERP systems, project management, and general-purpose applications too.

Key companies that use Python

The founded of Python worked in Google during the years 2005 to 2012. So, it is clear that the company uses Python. By 2016, Facebook and Instagram started using Python extensively. While Spotify incorporates more than 6000 processes whose implementation is through Python in their company.

Netflix and Dropbox considered the programming language around 2012. By 2015, Reddit also started using the language widely.

Some other companies that use python in the real world are shown in the picture below.

What is machine learning?

• This method of learning is known to improve efficacy. It also provides precise and accurate information over time. So, in future machine learning can be highly reliable with appropriate advancements.

• Machine learning methods do not require human guidance. Hence, they are very instantaneous, fast, and durable. They are reliable with decisions in the future.
The machine learning method along eliminates time lag or delays and can also check for viruses, bots, and other threats.

Machine learning is instrumental in the modern era. Python is a widely used language in the real world is known to be the base for machine learning.

The reasons why Python is suitable for machine learning are as follows.

• Most of the artificial intelligence frameworks are supported by Python as it can handle various platforms.

• The language is very flexible compared to other languages which make it accessible for machine learning as it requires understanding scenarios based on specific patterns.

• The language has a more natural syntax and semantics to follow. So, it reduces the complexity of the code or the algorithms necessary for machine learning.

• It is the best language for beginners. Hence, it is a simple language that can reduce complications that arise during the machine learning method. The language is often described as a readable pseudo code.

Programming languages are essential in today’s world. They help in making human thoughts turn into reality. The programming languages assist in defining structures, classes, and objects that deal with the real world. They also help to solve problems more efficiently and in an ordered fashion. Data can also be stored in these languages in such a way that they give better a view, analysis, and reports.

Programming languages are also great for designing anything ranging from essential to complex systems. Without these languages, the world would be an unbelievable place. Some renowned programming languages include Python, XML, HTML, JavaScript, and much more.

Python is a renowned high-level language with applications in various sectors. Major companies such as Google, Facebook, and Amazon use this programming language. The language has many key features and advantages which include compatibility with multiple platforms, standard libraries, object-orientated design, and simple interface. It is also an excellent language for machine learning.

Python also has special libraries and is widely supported by large developers. It is also simple language without any complex syntax and semantics, so it is ideal for developing machine learning.