Flutter or PWA – Which One is the Best Choice for Your Business? 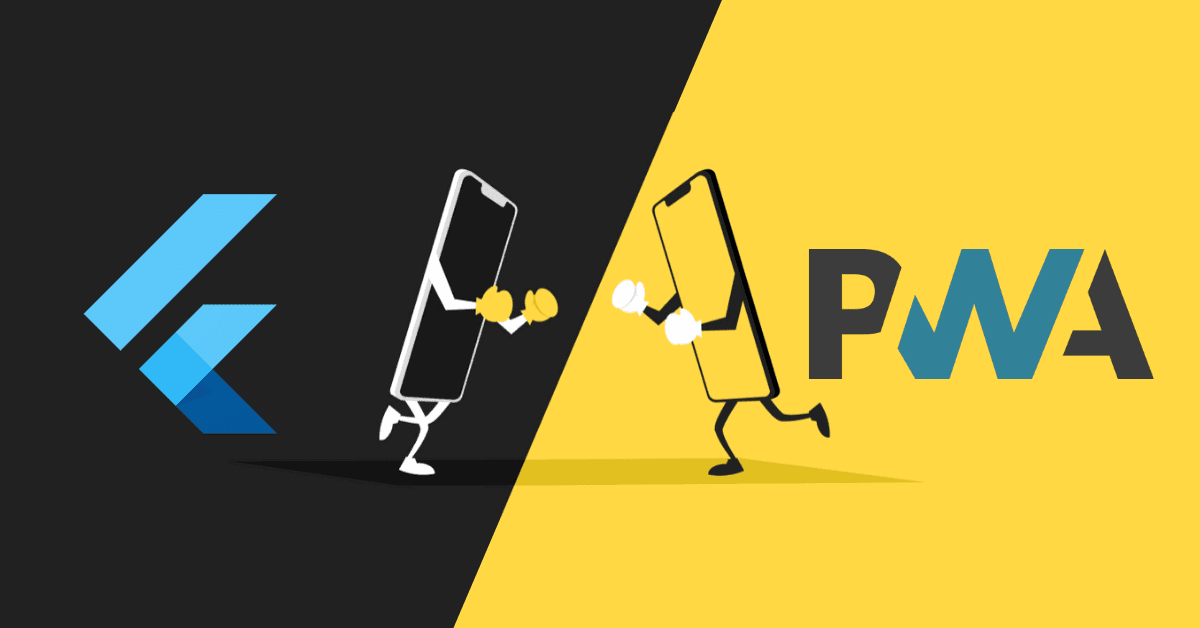 A decade ago, building mobile apps was a costly affair. You only had the choice of building native apps that demanded thousands of dollars. But now, technology has changed everything by leaps and bounds.

The kind of value they add while building a cross-platform mobile app makes them even more interesting. Not only is it beneficial for businesses in terms of the cost, but also reduces the efforts of developers by allowing them to code once & deploy it on multiple operating systems.

Though there are a lot of frameworks available to build cross-platform applications, Flutter and PWA are the best. And that’s where most entrepreneurs get confused.

So, in this article, we will demystify the conclusion by comparing Flutter and PWA. However, before making the comparison, let us understand the basics of both frameworks.

Without even knowing it, you probably are already using the apps made with Flutter. Have you bought anything from Alibaba? Are you running a campaign on Google Ads? Do you watch videos on Voot or have booked a cab via Ola?

If yes, then you have already witnessed the Flutter apps.

This framework has remained beta for a very long time. With its stable release, there is a lot of excitement about the new transformative technology for the developers. Within a short time, Flutter has become very popular on GitHub and has gathered plenty of stars.

How Flutter is Setting the New Trend in Mobile App Development?

Flutter is Google’s new open-source technology that has the ability to create native Android and iOS apps with the help of a single code base. To be precise, Flutter is not a framework, but a comprehensive SDK i.e. software development kit.

This means it already has everything that you need to build the cross-platform application. It includes rendering engine, readymade widgets, options to test and integrate APIs.

You will be surprised to know that Flutter follows the React-native development architecture but with a twist. The user-interface contents are automatically updated once the variables are updated in the code.

Whereas, Flutter’s object-oriented language is Dart, which uses (AOT) Ahead-of-Time compilation techniques and complies with the native code without any additional bridge. This speeds up the app startup time.

To know more about the difference between the two, continue reading React Native vs Flutter.

Debugging takes place in Flutter, and all the credit goes to Dart. The Dart Analyzer and Dart Observatory tools find errors with the help of specific commands. There is another method that includes Flutter-supported IDEs and debuggers. As Flutter doesn’t use a web view, it won’t debug directly in a browser like Ionic.

Why is Flutter Good for Your Business?

Indeed, Flutter has proven its worth in a short span of time. The framework is being utilized by industry leaders and has matured enough to build enterprise-level applications.

To give you a better understanding, let’s take a look at some of its best features;

Therefore, in practical terms, you can save up to 50% of your development cost and time by choosing Flutter over the Native apps and around 30-40% over other cross-platform frameworks.

One of the revolutionary things about Flutter as technology is that it lets you build beautiful and expressive user interfaces without much effort. Flutter has a consistent and unified object model, having a wide variety of widgets available in its arsenal.

Ranging from Cupertino (iOS style widgets) to material components, animation & motion APIs to styling, text, painting & effects, Flutter widget catalog has it all. By utilizing the layered architecture, this UI toolkit allows you to fully customize your cross-platform mobile app. As a result, you can render the app faster and build flexible UI/UX.

According to Flutter, it aims to provide 60 frames per second (fps) performance or 120 fps performance on devices capable of 120Hz updates. This simply means it is possible to build high-performance apps for both iOS and Android using Flutter.

Another interesting feature about Flutter is that it supports Fuchsia, which is an Operating System, still under development by Google. Different sources say that Fuchsia has the ability to replace all the other operating systems. So, keeping the future of apps technology stack in mind, the use of Flutter can secure the future of your application.

Ready to get started with your app idea? Hire Flutter App Developers & turn your dreams into reality.

Now, as we are fully aware of the Flutter, it’s time to take a look at its top contender;

The concept behind these apps is quite interesting. It is a solution that bridges the gap between web and native apps. How? Well, let’s find out.

The web is incredible and provides opportunities to businesses to reach anyone and anywhere, without any requirement of a specific device. Thus, building a website increases the reach of a business.

Whereas native apps are more reliable, incredibly rich in terms of features, and can work without the internet. Native apps also have the ability to access data (read or write) from the local file system, both via means of hardware & software.

So, web apps have a reach advantage, and native apps have amazing capabilities. That’s how these apps came into the picture, as they offer the best of both worlds.

Converting a traditional website into PWA amplifies SEO and on-site conversions. PWAs deliver unique value to an organization by catering to digital capabilities beyond what is possible with native apps and mobile websites only.

Are you planning to convert your existing website into a PWA? Hire Progressive Web App Developer now & get started.

They are beautifully designed for different scenarios and use cases.

Advantages of PWA for your Business

There is a long list of real-world examples demonstrating the power and potential of PWA. The biggest example is Starbucks. As soon as the coffee chain giant released its progressive web app, it not only doubled the monthly active customers but it increased the total orders.

Here are the worth considering benefits.

If you are a mobile app development company, you must know that PWAs can function without any internet connection, and the credit goes to ‘Service Workers’ and JavaScripts. They remove the app’s typical connectivity need by enabling instant access to the cached resource.

This feature becomes really handy when you need to revisit a website. Hence, it certainly makes PWA useful for customers having connectivity issues.

Progressive web apps make the use of “web app manifest”, providing the necessary information like name, icon, splash screen, and theme colors in a JSON-format.

These apps are device agnostic which means you can download, distribute, or share them via a simple URL.

5. Compatible with Apple, Google, and Microsoft

The Facebook app used on an Android device is quite different from the one on the iPhone. This clearly means that separate codebases are required to manage apps for Apple and Android devices. Whereas progressive web apps are compatible with every platform, making them more accessible and user-friendly.

Do you want to build a cross-platform web application? Contact us now & hire developers online.

Access to mobile features like push notifications is available in PWAs. It enables businesses to re-engage users to visit their websites again.

Flutter vs PWA: Which is Better?

There is always incertitude as to what a customer expects from a smartphone application. An app with an excellent user interface and exceptional user experience compatible with multiple platforms is easy to develop.

Flutter and Progressive Web Applications are two hot cross-platforms in trend these days. Here is the long list of differences between Flutter & PWA; 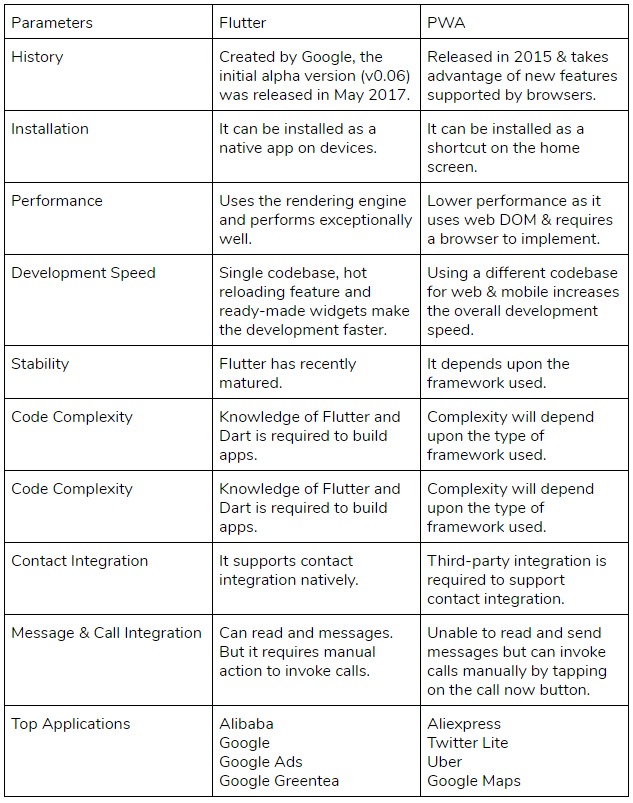 While Flutter offers you the advantage of expressive UI, faster performance, and development, Progressive web applications allow you to target a wide range of users via one web solution (both on desktop and mobile).

When to Choose Flutter?

If you have a large share of the user base available on iOS, that prefers a fast performing application, Flutter is your choice. Not only will it enable you to launch an app with a native look & feel but also gives you an opportunity to generate revenue by using in-app purchases and other monetization options.

When to Choose PWA?

Still, confused about building your app via PWA or Flutter? Well, the answer to your questions will depend upon your requirements.

Difference Between Flutter Vs. PWA: